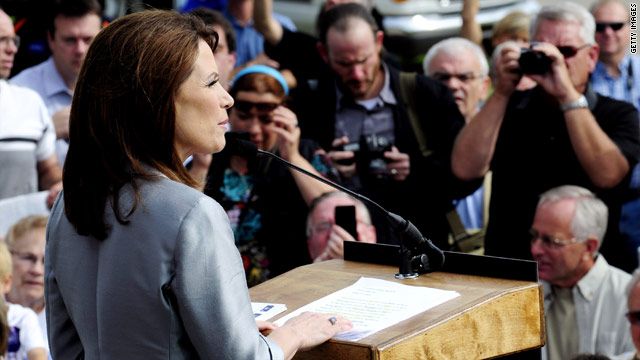 Bachmann at top of list in new Iowa poll

(CNN) - Need more proof that Rep. Michele Bachmann's bid for the GOP presidential nomination is on the rise?

Here it is: A quarter of likely Iowa GOP caucus goers say they are likely to support Bachmann in the battle for the nomination, according to a new poll.

An IowaRepublican.com survey indicates the congresswoman from neighboring Minnesota at 25 percent, with former Massachusetts Gov. Mitt Romney, who's making his second bid for the White House, at 21 percent.

According to the poll, nine percent of those questioned say they back former Minnesota Gov. Tim Pawlenty, with an equal amount supporting former Godfather's Pizza CEO and radio talk show host Herman Cain. Rep. Ron Paul of Texas, who's making his third run for the presidency, was at six percent, with former House Speaker Newt Gingrich at four percent, former Sen. Rick Santorum of Pennsylvania at two percent and former Utah Gov. and former U.S. Ambassador to China Jon Huntsman at one percent.

Although it was released Sunday, the poll was conducted June 26 through June 30, just a few days after a much reported survey from the Des Moines Register was in the field. That poll, which had Romney at 23 percent and Bachmann at 22 percent, sparked some favorable stories for Bachmann, who earlier in June received positive headlines for her performance at the much watched CNN/WMUR/New Hampshire Union Leader GOP presidential debate.

A strong showing in next February's Iowa caucuses, which kick off the presidential caucus and primary calendar, is crucial for Bachmann's hopes of winning her party's nomination. A strong showing in Iowa is also extremely important for Pawlenty, who's gone up with two television commercials in the state in the past couple of weeks. His nine percent in the IowaRepublican.com survey is up from a six percent showing in the Des Moines Register poll.

IowaRepublican.com is headed by Craig Robinson, a former political director of the Republican Party of Iowa who is not taking sides in the battle for his party's presidential nomination. The poll, which was conducted by Voter/Consumer Research, questioned 500 likely Iowa GOP caucus goers. The survey's sampling error is plus or minus 4.4 percentage points.

The release of the new poll comes just under five weeks from a straw poll in Ames, Iowa. Bachmann and Pawlenty, as well as Paul and a few other candidates, are putting a lot of time and effort into getting supporters to attend the influential straw poll.