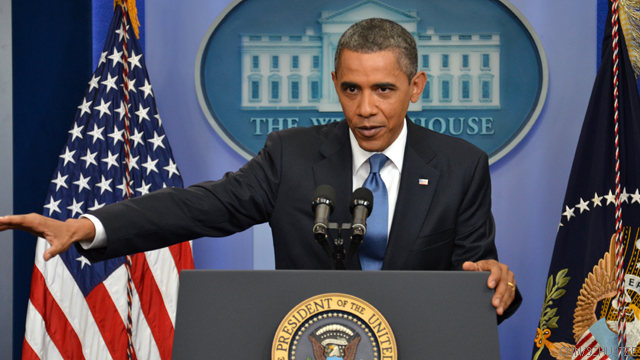 (CNN) - President Obama will hold a news conference Monday morning to give an update on the efforts to reach an agreement on the debt ceiling negotiations. Check back below for live updates and read the full story here.

12:00 p.m. ET - On CNN: @WolfBlitzerCNN said Obama's "got an enormous problem with his liberal base, by even putting Social Security and Medicare on the table."

11:55 a.m. ET - Press conference concludes with a question yelled at him by reporter while leaving: "Will we see you every day?"

11:49 a.m. ET - Obama: "This recession has been hard on everybody, but it's harder on folks who've got less," adding that he is "obsessed" with all the families in the county who are doing the right thing every day and feel like "they're falling behind no matter how hard they work."

11:46 a.m. ET - Obama said he's not going to comment on his relationship with his caucus, but that in his experience, the speaker is a "good man who wants to do right by the country."

11:44 a.m. ET - Obama said they are hesitant to weigh in publicly because they don't want to make anybody mad.

11:43 a.m. ET - Q: Have you spoken to business leaders as part of these negotiations?

11:43 a.m. ET - @BryanMonroeCNN: Obama to reporter asking abt deal: "I might enjoy negotiating with you, but I don't know how much juice you have in the Republican caucus."

11:42 a.m. ET - Might be smart to do something now to strengthen social security as part of this deal. Would not discuss further details.

11:37 a.m. ET - Obama said he is convinced the steps in the recovery act saved or created a "whole bunch of jobs." He said he won't get exactly what he wants in a deal because he is operating with some political constraints, give the deal will have to pass through the House of Representatives. He said payroll tax cuts are on the table.

11:34 a.m. ET - @ShepherdCNN: @YellinCNN is the only woman in the front row of President Obama's news conference.

11:33 a.m. ET - Obama said the reason to address Social Security is to make sure the benefits are there for seniors. "If you're going to do a bunch of tough votes, you might as well do it now," Obama added.

11:31 a.m. ET - "It is hard to persuade people to do hard stuff that includes trimming benefits and increasing revenues<" Obama said. "Reason we have a problem now is people keep avoiding hard things."

11:29 a.m. ET - Obama said he believes House Speaker John Boehner is sincere about "doing something big," but that the politics on his side of the aisle are difficult.

11:28 a.m. ET - Obama said the leaders in the room have to step up and do the right thing despite what those outside the room are saying.

11:26 a.m. ET - "I feel pretty confident" Americans don't want U.S. to default on its debts, Obama said. He said some of the professional politicians know better than to say we shouldn't raise the debt limit.

"This isn't something I'm making up," Obama said. "I'd rather be talking about stuff everybody welcomes like new programs or the NFL season getting resolved. Unfortunately this is what's on our plate."

11:24 a.m. ET - Q: Isn't the problem that you and others have failed to convince the American people we need to raise the ceiling?

11:22 a.m. ET - @LisaDCNN: OBAMA-TAXES: Nobody has talked about increasing taxes now or next yr. We have talked about closing loopholes in 2013.

11:21 a.m. ET - Obama said nobody is talking about increasing taxes now, or next year. They are talking about closing loopholes for "corporate jet owners" and revenues for higher income earners.

"I'm prepared to take on significant heat form my party to get something done," Obama said.


Click to watch video
11:19 a.m. ET - Q: Will you veto a deal that only addresses the issues in the short-term.

11:18 a.m. - Obama said he is open to all proposals but will not consider a deal that lasts for a month or two. "We will resolve this for a reasonable period of time," he said.

11:17 a.m. - Obama said there is resistance from Democrats on entitlements and from Republicans on revenues. "The American people want to see something done."

11:13 a.m. ET - President Obama said the good news is everyone agrees we should use this as an opportunity to do "something meaningful on debt and deficit." "We cannot threaten the United States' full faith and credit," Obama said.

11:01 a.m. ET - @LisaDCNN: OBAMA: I'll tweet out the ?s and qk sum of answers but you can also watch on CNN. For those preferring Bravo repeats, I'll tweet.

10:26 a.m. ET - @wolfblitzercnn: Heading to DC CapSet for our live #CNN special coverage of President Obama's newser starting at 10:50AM