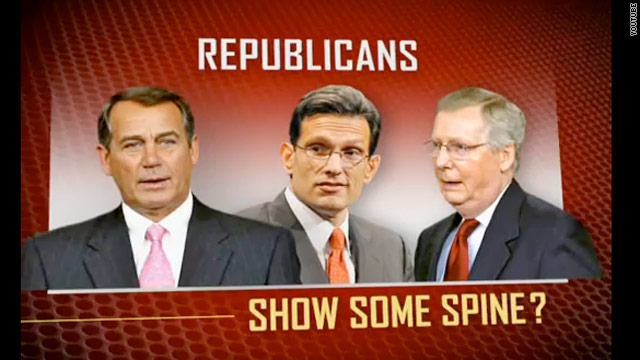 (CNN) - The conservative Club for Growth launched a new ad Monday urging Republicans in Congress to stand firm on the "Cut, Cap, and Balance" pledge that opposes increases to the debt ceiling not accompanied by spending cuts, statutory spending caps and a Balanced Budget Amendment.

The 30-second spot is part of a six figure buy that will start running on Fox News Tuesday, according to a source with knowledge of the ad. The source said the ad will run indefinitely depending on events in Congress.

"President Obama and the Democrats want to raise our debt limit even higher, spending even more," the ad says. "But what will Republicans do? Cave in? Or show some spine?"

The pledge, signed by six Republican presidential candidates and many members of Congress, has become a litmus test for the support of Republican Sen. Jim DeMint of South Carolina, a kingmaker in conservative politics.

Club for Growth is a fiscally conservative organization that endorses and contributes to Republican candidates.

Club president Chris Chocola said his members will "closely watch to see which Members of Congress fight to reform a broken budget process, and which ones make deals that sell out our fiscal future."

"A Balanced Budget Amendment is the strongest possible reform to keep Congress from continuing the endless cycle of more spending, debt and taxes – and Republicans should demand no less as part of any deal," Chocola said in a statement.