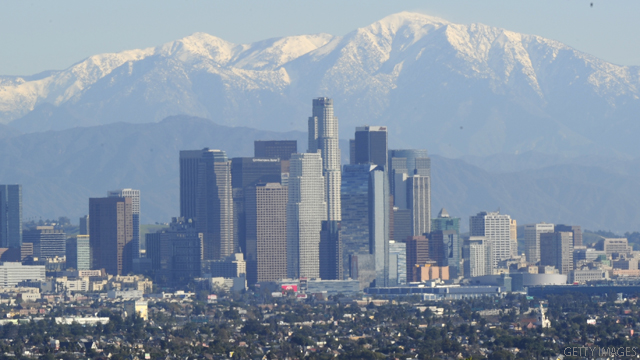 (CNN) - A conservative Republican businessman with strong support from many tea party activists is hoping to pull an upset Tuesday in a special election for an open congressional seat long held by Democrats.

Voters in California's 36th Congressional District, which covers much of Los Angeles County's South Bay area, head to the polls to replace former Rep. Jane Harman, who stepped down earlier this year.

Turnout in the contest is expected to be near record lows, which could help Republican candidate Craig Huey, who is making his first run for public office. He's facing off against Democrat Janice Hahn, a Los Angeles City Council member and part of a prominent local political family, which gives her high name recognition.

Hahn was expected to be in the general election. Huey was not.

The two were among 16 candidates on the ballot in the first round in May. Hahn finished first in that contest and Huey came in second, upsetting Democrat Debra Bowen to make it to the second round.

Harman resigned from Congress in February, after 18 years in the House, to become president and director of the Washington-based Woodrow Wilson International Center for Scholars. She cruised to easy re-election victories over the past decade, and Sen. Barack Obama won the district by 30 points over Sen. John McCain in the 2008 presidential election.

But with unemployment in the state at 11.7 percent, Republicans think they have a shot at grabbing back this district, which includes a number of beach communities and is also home to many aerospace industries.

With concerns over low turnout, Hahn is receiving some get out the vote assistance from national Democrats, including former President Bill Clinton, who taped a robo-call message to people in the district saying she's "the right choice."

Huey, the owner of a marketing company, has self financed much of his campaign, and has won strong support from many of the area's tea party activists. The Tea Party Express, one of the largest national tea party groups, put out an email to supporters earlier this week saying "If you loved Ronald Reagan as much as I did, then you will absolutely love the policies of Craig Huey. He is a total Reaganite, and exactly the kind of tea party Republican we need in Congress."

Huey has criticized Hahn as a "career politician."

The contest gained national attention last month when a web ad seen on YouTube made by an outside group not affiliated with Huey attacked Hahn, superimposing her face on a stripper's body and linked her to gang members. Huey distanced himself from the video, denouncing it as racist and sexist.