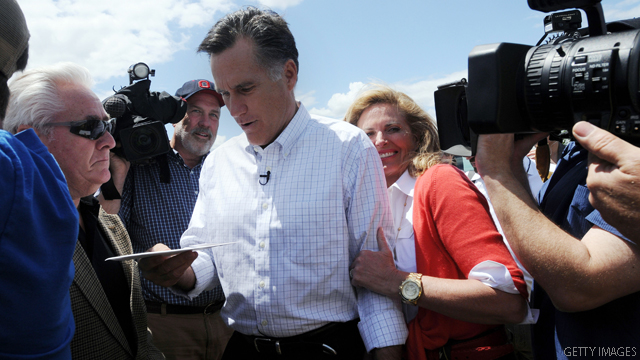 Romney doubles down over debt

(CNN) - Mitt Romney, the frontrunner for the GOP presidential nomination, responded Tuesday to criticism that he has been too quiet during the debt ceiling negotiations, largely reiterating his position in the debate.

"We cannot lose sight of the need to move the President toward meaningful fiscal responsibility," Romney said in a statement to CNN. "A vote on raising the debt ceiling has to be accompanied by a major effort to restructure and reduce the size of government."

But the comments from the former Massachusetts governor were coupled with his usual jabs at the president, this time over government spending.

"I've never seen an enterprise in more desperate need of a turnaround than the U.S. government," Romney said.

Romney was also one of six GOP contenders to sign the "Cut, Cap Balance Pledge," which opposes any debt limit increase unless there are substantial cuts, enforceable spending caps and a Balanced Budget Amendment.

As the perceived frontrunner, Romney has leveled most of his criticism at President Obama instead of other Republicans, but some other White House hopefuls, polling below Romney, said he has avoided the debt ceiling issue.

Former Sen. Rick Santorum of Pennsylvania said the current debate in Washington is about "what kind of leadership you're going to show."

"If you're running for president, you've got to show how you would handle a situation like this," Santorum said in an interview <a href="(Monday.

"Conservatives around the country are speaking out against raising the debt ceiling, yet Governor Romney has been largely absent from this debate, just as he was during the health care debate when he was sidelined by his record in Massachusetts," Conant said.