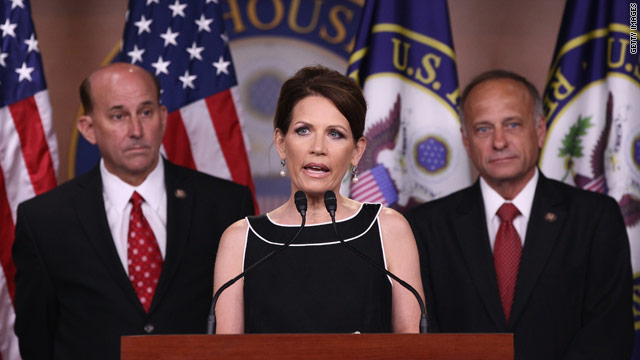 "Don't allow our military men and women to dangle over a fire and think they won't get paid," Bachmann said at a press conference on Capitol Hill Wednesday.

If President Barack Obama and Congressional leaders don't reach a deal to raise the federal debt limit by Aug. 2, the government will default on its loans, resulting in what the White House warns as a potential economic disaster.

Should that happen, Obama said in a CBS News interview Tuesday there would be no guarantee that payments of military veterans' salaries would go out after the deadline.

"That's a dangerous game to play," Bachmann said. "Take it off the table."

On Wednesday Bachmann announced a bill she's co-sponsoring with GOP Reps. Louie Gohmert of Texas and Steve King of Iowa that aims to ensure service members receive their paychecks on time.

House members made a similar proposal in April amidst concerns of a government shutdown.