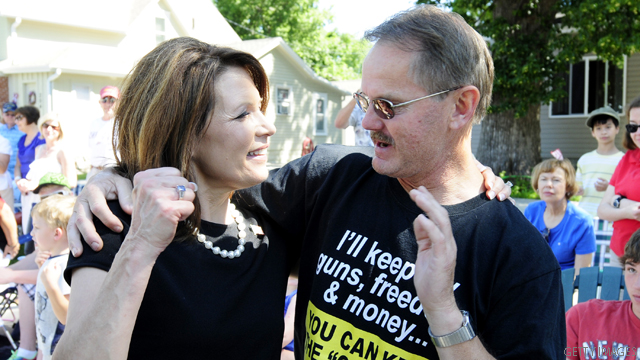 According to the Quinnipiac University Poll of Republican and Republican-leaning voters released Tuesday, Minnesota Rep. Bachmann garnered 14 percent support, up eight points from a June 8 survey. Her poll numbers have risen considerably since entering the race on June 27.

Former Massachusetts Gov. Romney's support remained unchanged from June at 25 percent. Former Alaska Gov. Sarah Palin, who has yet to jump into the race, had 12 percent, followed by Texas Gov. Rick Perry, who is considering a run, at 10 percent. No other candidate received over 6 percent.

Among registered voters President Obama beat all of his potential Republican challengers in hypothetical general election match-ups. He held the smallest lead over Romney, 47 percent to 41 percent, which was unchanged since the last survey.