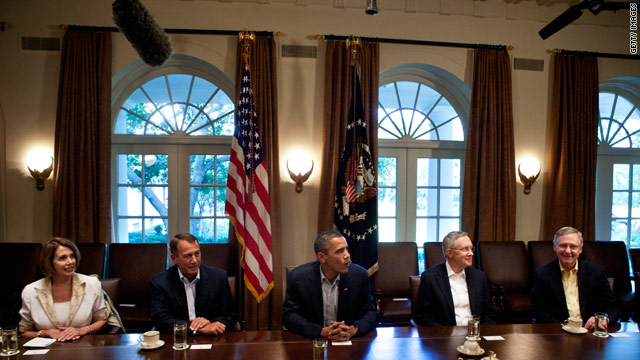 Washington (CNN) – As increasingly tense debt limit talks continue Thursday afternoon, "revenue neutral items" are expected to be the focus, according to a senior administration official.

This is the moment, according to the source, when the administration hopes the GOP will deliver specifics on what, if any, revenue raisers Republicans would be willing to accept in exchange for tax cuts.

For instance, the official questioned whether the GOP might be willing to change the depreciation formula for oil and gas companies in order to get an extension of the payroll tax cuts.

"We could come in today to discover that (Majority Leader Eric) Cantor, (House Speaker) Boehner and (Senate Minority Whip Jon) Kyl say no to everything," the source said. "We want them to tell us what special things they will consider to get their tax cuts."

Obama gave a Friday deadline for an assessment of the talks.

Discussions have been tense at times, and some of the key players appeared to not be participating beyond attendance.

The official said Cantor "is the only one who talks" in the sessions.

As the brinksmanship continues, the administration source noted the president did walk out of the talks Wednesday, but made it clear he did not walk out in the middle of a discussion about potential solutions.

"It's not like he walked out in the middle of the discussion. People had made their final points," he said.

From the administration's point of view, it's the Republicans who are having a tough time getting their act together–particularly at the leadership levels. The Democratic official said the GOP is fracturing as Cantor "sees an opportunity on Boehner and he's going to drive a truck through it."

Politically, the source added, "the tail is wagging the dog" in the GOP. "This is what happens when you are sitting on top of a tidal wave (of House freshmen) you didn't create."