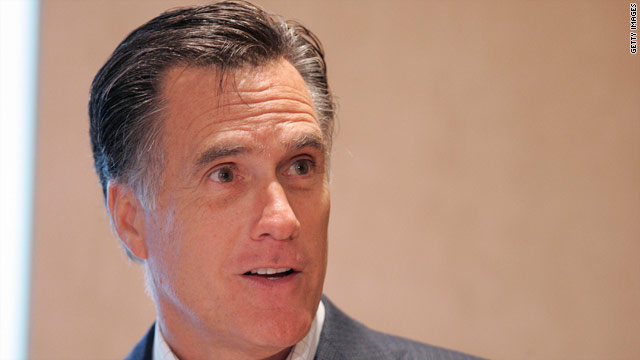 Washington (CNN) - Accused by Democrats and a few of his Republican rivals of taking a low profile on the debt talks between Congressional leaders and the White House, GOP front-runner Mitt Romney has now hit the ceiling.

At a town hall meeting in the early voting state of New Hampshire Thursday, the former Massachusetts governor drew a "line in the sand," saying nothing short of the "Cut, Cap, and Balance" plan proposed by several conservative Republicans is acceptable as a condition for raising the debt ceiling.

Nearly all of the declared and potential Republican candidates are ratcheting up the rhetoric on the issue. Former Alaska Governor Sarah Palin returned to one of her controversial catch-phrases in an interview on the subject on Fox News.

Texas Congressman Ron Paul released a new TV ad that warns past budget compromises with Democrats have only led to higher taxes.

The ad fails to mention President Bill Clinton balanced the budget in the late 1990's after raising taxes.

At a press conference on Capitol Hill Wednesday, Minnesota Rep. Michele Bachmann accused the President and even the Treasury Secretary of passing on to the American people what she described as a "misnomer."

Hours after her comments, the powerful Moody's investors' service announced it was reviewing the AAA bond rating for the United States.

For voters it's a question of who do you trust. Bachmann or Ben Bernanke?

The Federal Reserve Chairman was far from subtle when asked at a Congressional hearing Thursday about the consequences of missing the August 2 deadline for raising the debt ceiling.

"I think it would be a calamitous outcome," Bernanke said.

Raising taxes is out of the question for nearly every Republican in the presidential field. All except one candidate have signed a prominent pledge not to raise taxes.

Any Republican accused of playing politics with the issue can point to President Obama who voted against hiking the debt ceiling in 2006.

It's a vote the President says he now regrets.

"That was just an example of a new senator making what is a political vote as opposed to what was important for the country," President Obama told ABC News in April.

Besides Representatives Bachmann, Paul and Michigan Rep. Thad McCotter, the rest of the GOP presidential candidates don't have to cast a vote on the debt ceiling. That's a luxury a lot of politicians in Washington wish they had.