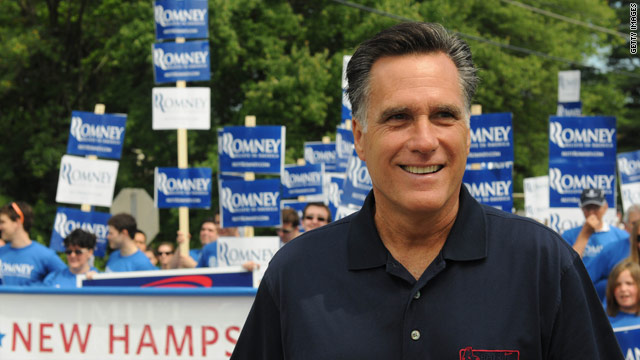 (CNN) - Mitt Romney remains far ahead of the rest of his rivals for the 2012 GOP presidential nomination in the first poll of likely Republican primary voters in New Hampshire conducted entirely in July.

According to an American Research Group survey released Thursday, 29 percent say they're likely to back the former governor of neighboring Massachusetts, who's making his second bid for the White House.

The poll indicates that Rep. Michele Bachmann of Minnesota has the support of 12 percent of those questioned, with former New York City Mayor Rudy Giuliani at nine percent, former Alaska Gov. Sarah Palin at eight percent, former House Speaker Newt Gingrich at seven percent, and former Minnesota Gov. Tim Pawlenty at five percent. Everyone else is below five percent. Giuliani and Palin are considering runs for the GOP nomination, but have not taken concrete steps towards setting up campaigns.

Romney has been the overwhelming front-runner in New Hampshire polling since last year. Bachmann has now come in second in the three surveys conducted since a much-watched CNN/WMUR/New Hampshire Union Leader GOP presidential debate in mid-June. Bachmann received positive headlines for her performance at that debate.

Romney has spent a lot of time and effort in the Granite State. Winning the New Hampshire primary is crucial to his hopes of capturing his party's presidential nomination.

The American Research Group poll was conducted July 9-13, with 600 likely New Hampshire GOP primary voters questioned by telephone. The survey's sampling error is plus or minus four percentage points.