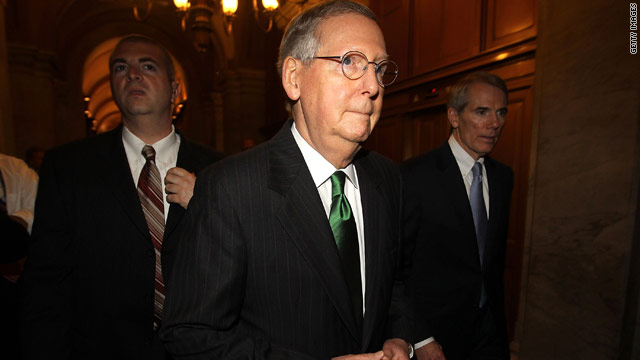 "The American people didn't send more Republicans to Washington so they could give President Obama more power," said the group's president, Chris Chocola, in a statement Friday. "This backroom deal is just another sellout of the free-market principles that make America strong."

McConnell's plan would give the president the authority to raise the debt ceiling three times through 2012. While it would prevent the government from defaulting on its loans by the Aug. 2 deadline, it would also allow Congress, with a two-thirds majority vote, to stop President Barack Obama from making the short term increases in the debt limit throughout the year. The president could then veto the vote, but it's unlikely that Congress could gather enough votes to override his veto.

"I think it's worth keeping on the table. There are a lot of options that people have floated, and, frankly, I think it's an option that may be worthy at some point," Boehner said in a Capitol Hill press conference.

But Club for Growth claims the Treasury Department has enough cash on hand to fulfill the debt, labeling the Aug. 2 deadline as "meaningless."

"This proposal is a dereliction of duty by Senator McConnell and everything that's wrong with Washington," the statement said. "It's nothing more than a legislative maneuver by so-called Republicans to avoid responsibility for America's spending problem."

The group earlier in the week released a television ad calling on Republicans to "show some spine" in the debt talks and resist a debt ceiling increase without spending cuts, spending caps and a balanced budget amendment. The group's demands echo a popular pledge–the "Cut, Cap, Balance Pledge"–being pushed by fiscal conservatives, including several of the 2012 presidential candidates.