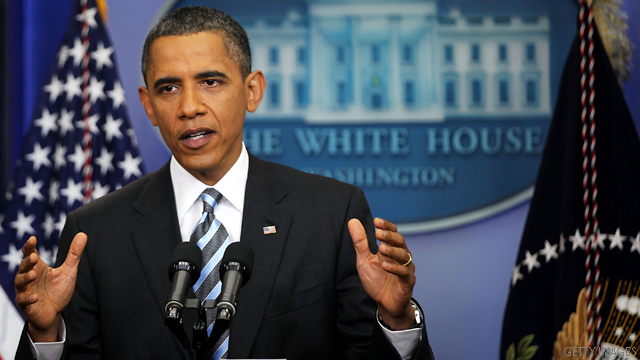 (CNN) - President Barack Obama is scheduled to hold a news conference at 11 a.m. ET Friday to provide an update on the status of negotiations to raise the federal debt ceiling. Check below for live updates and read the full story here.

11:35 a.m. ET - @LisaDCNN: OBAMA ANSR 6: Yes, there may be some interest to do something more than the minimum done. But we're running out of time.

11:34 a.m. ET - Obama said American people will remember who is trying to get a deal done and who isn't because voters will remember when they go to the polls next time.

11:32 a.m. ET - @EWErickson: What we are witnessing is a man who has gotten passes all through life now being forced for the first time to take a real position.

11:29 a.m. ET - @CRrileyCNN: What I haven't heard yet from Obama is a clear path forward toward a deal. That's not good news.

11:29 a.m. ET - @donnabrazile: President Obama: "I still have hope." So do I! Let us never lose hope or our faith. Politicians come and go but let us remain committed.
11:29 a.m. ET - Obama said part of the job is criticism and he doesn't expect politicians "not to think about politics." But, he said, there are things bigger than politics.

11:28 a.m. ET - Q: How much is political atmosphere poisoning the well on negotiations?

11:27 a.m. ET - "I always have hope, don't you remember my campaign?," Obama said. Adds that the American people give him hope.

11:26 a.m. ET - On McConnell plan: Glad everyone realizes we should avoid "Armageddon." Obama said the plan doesn't solve the problem.

11:21 a.m. ET - @CRrileyCNN: Obama now laying out why he didn't press harder for the Simpson-Bowles debt plan. Here is what that plan called for http://bit.ly/p0pk2W

"The problem is members of Congress are dug in ideologically ... they boxed themselves in with previous statements," he said.

11:18 a.m. ET - Q: Any regrets from these negotiations, are you sorry you didn't take a debt package to the American people earlier?

11:18 a.m. ET - @CRrileyCNN: Obama continues to stress the need for revenues in any deal. GOP is adamantly opposed.

11:16 a.m. ET - Obama said he thinks about this like a layer cake ... start by doing the bare minimum and then add on, fixing the problem for a "decade or more."

11:14 a.m. ET - Addresses "cut cap and balance pledge," signed by many Republicans and GOP presidential candidates: We don't need a constitutional amendment to balance the budget.

11:12 a.m. ET - Obama said the House will vote on some things to "make political statements."


Click to watch video
11:07 a.m. ET - Obama said he wants a plan where current beneficiaries aren't affected but the programs overtime are changed so they are more sustainable. When asked about raising the retirement age, said he would not get into specifics.

11:05 a.m. ET - Obama said he has told Congresional leaders to produce a plan to raise the debt ceiling and and address the deficit and debt. Obama said "show me a serious plan, I'm ready to move, even if it requires some tough decisions on my part."

11:04 a.m. ET - "I'm still pushing for us to achieve a big deal," Obama said. If we can't get the biggest deal, lets still "send a signal that we're serious about this problem." He said the least attractive option is one where the debt ceiling is raised with no progress on the deficit or debt.

11:02 a.m. ET - Obama said it is hard to do a big package. Republicans, he said, have made it clear they aren't willing to do revenues but his hope is that "they're not just listening to lobbyists special interests, but also to the American people."

11:00 a.m. ET - American people expect "we get our fiscal house in order," Obama said. During the negotiations he said he has stressed to Congressional leaders that this is an opportunity to "seize the moment" through shared sacrifice – cuts in domestic spending, defense spending, health care spending (including Medicare) and revenues.

10:59 a.m. ET - Obama said it's encouraging that everyone agrees we cannot default on our loans, even though "we should not even be this close to a deadline."

10:40 a.m. ET - Talks between top Democrats and Republicans over the last five days have failed to produce a concrete deal. Obama suggested Thursday that a sixth meeting could be held this weekend if sufficient progress isn't made, according to a Republican aide familiar with the latest negotiations.

10:37 a.m. ET - Obama told congressional leaders Thursday he expected them to consult with their respective caucuses and find agreement over the next 24 to 36 hours on how to proceed, after previously setting a Friday deadline.

10:35 a.m. ET - Negotiations have reflected core ideological principles on both sides of the aisle over taxes and the size of government.

10:30 a.m. ET - Administration officials have warned that a failure to raise the current $14.3 trillion debt ceiling by August 2 could trigger a partial default.