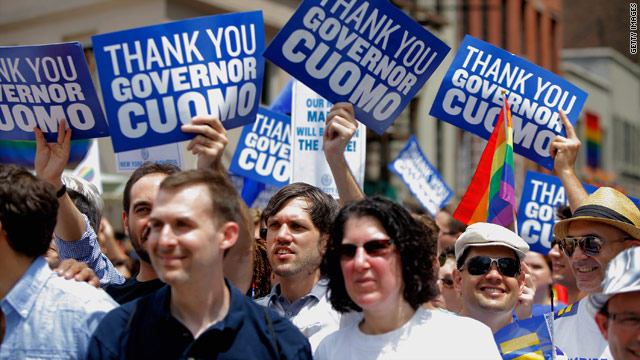 State Sen. Mark Grisanti of Buffalo, for instance, amassed just $30,000 from May 1 to June 24, the day same-sex marriage was approved. But in the two-and-a-half weeks after his vote, Grisanti reported receiving $73,000 in contributions – including huge donations from high-profile gay rights supporters like New York City Mayor Michael Bloomberg and Tim Gill, who is based in Colorado.

For State Sen. Roy McDonald, whose districts include Rensselaer and Saratoga counties, the weeks following his vote proved even more lucrative. After receiving $31,000 in the two months preceding the vote, McDonald garnered approximately $90,000 in just 17 days, more than doubling his total haul for all of 2011, according to Bill Mahoney, legislative operations and research coordinator for the New York Public Interest Research Group.

Three of the four Republican supporters of gay marriage denied multiple requests for comment on the spikes. But conservatives were quick to decry the flood of donations.

"They consistently and adamantly said they were opposed to same-sex marriage," said the Rev. Jason McGuire, executive director of New Yorkers for Constitutional Freedoms. "But after some meetings with major financial backers their position flipped, and they're now raking in tens of thousands of dollars."

Michael Long, chairman of the New York State Conservative Party, likewise alleged that the Republicans voted for gay marriage "because of the largesse of money now flying through their accounts."

Yet State Sen. James Alesi, who represents areas around Rochester and is one of the four Republicans, vehemently contested such accusations.

He contends that political contributions never influence his votes. He claims that - despite voting against the bill - he wanted to back marriage equality when it was proposed in 2009.

"No matter what contributions I've ever had from anybody, and they come from many points of the political compass, they don't influence my vote," Alesi said. "Conservatives would like to assert that because they're filled with hatred over this; they're filled with revenge and they'll say anything."

Alesi posted dramatic leaps in campaign finance funds. The donations received by the fourth Republican, State Sen. Steve Saland, had not been disclosed as of late Friday.

Whatever is in their campaign accounts, some right-wing Republicans vowed that the senators would pay for their votes at the ballot box.

"We understand that the gay money, particularly in New York, is a bit overwhelming; however, the base of the Republican Party is going to have something to say," said Connie Mackey, president of the political action committee for the Family Research Council, a coalition of Christian conservatives.

"The people of New York will de-elect those who didn't stand on principle."

The fact these senators are being threatened with primary challenges, due to their vote on one issue, raises a broader question: How open are Republicans to divergent views?

Alesi said the GOP would make a grave mistake by setting up primaries for one's vote on the gay marriage issues alone. And Gregory Angelo, chairman of the pro-gay rights group Log Cabin Republicans, said the party should be more inclusive, not less.

"Those who are calling for the purging of (these) Republicans from the party are certainly going to end up on the wrong side of history," said Angelo. "We should move forward as a party."

Kevin Nix, director of communications for the Human Rights Campaign, said opponents of marriage equality were "trying to tarnish the courageous position" of the senators.

"How is doing what the majority of the people want you to do any less than democracy in action? It would be different if we were talking about an issue that enjoyed only a sliver of support; that's clearly not the case," said Ross Levi, executive director of the Empire State Pride Agenda advocacy group.

Thomas Duane, a gay state senator, is happy the vote turned out as it did, culminating with New York Gov. Andrew Cuomo signing it into law. But even he said it's possible money may have played a role influencing the political process.

"Whether it's LGBT money or business council money or the gas industry, there's too much hard money and too much soft money being distributed - and that needs to be reformed," Duane said.

But in this case, the Manhattan Democrat, said he thinks the politicians ultimately voted what they believed, not what would benefit them most financially.

"I think that votes on matters of conscience are not based on campaign contributions, but are based on feelings of the heart," Duane said. "I would like to believe that."