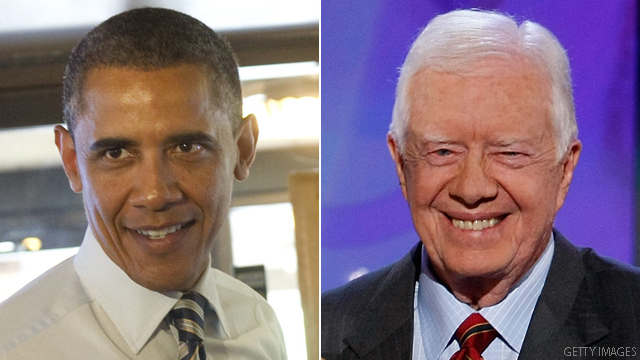 The former Massachusetts governor is expected to link the Democrats while campaigning in New Hampshire Friday. In a press release, Team Romney said Obama's comments Thursday in a television interview that Americans are "stressed out" are equivalent to Carter's 1979 "Malaise" speech when he said Americans have a "crisis of confidence." Friday is the 32nd anniversary of the address.

"Yes, Mr. President, Americans are stressed – stressed about rising unemployment, falling home prices, and an economy that's isn't working for them," Romney said in a statement. "Not since Jimmy Carter have we seen such failed economic policies. Who would have guessed that we'd look back upon the Carter Administration as the good old days?"

As the frontrunner for the GOP presidential nomination in 2012, Romney, a former businessman who's making his second bid for the White House, has consistently taken aim at the president over his handling of the economy, telling voters it helps to have had a job if you hope to create jobs.

At an event in New Hampshire Thursday, Romney needled the president over the debt ceiling negotiations.

"Come on, Mr. President," Romney said. "You can, by yourself, cut spending, agree to cap the spending and put in place a balanced budget amendment."

"Mitt Romney is so out of touch he thinks what Americans need right now is to make life more difficult for seniors by ending Medicare and slashing Social Security to continue funding tax breaks for millionaires and billionaires," Woodhouse said in a statement. "Mitt Romney's failed leadership and policies are a form of stress no American should be subject to."