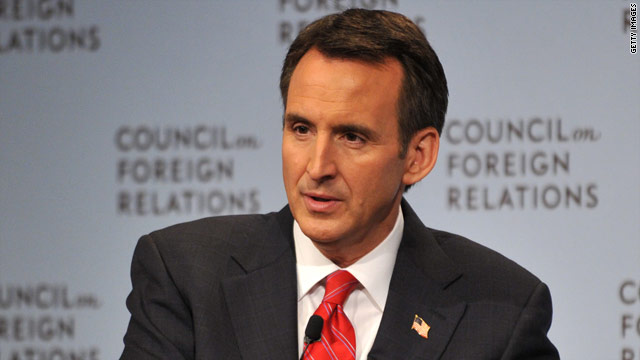 In an email, provided to CNN by a Republican source, Ayers pointed out that Pawlenty's second quarter fundraising total of $4.5 million outpaced every GOP candidate other than the frontrunner, former Massachusetts Gov. Mitt Romney.

He acknowledged Pawlenty's relatively weak standing in Iowa polling. But he argued that early polls rarely determine the nominee.

Ayers signed off with the faux Latin phrase "Illegitimi non carborundum," meaning: "Don't let the bastards grind you down."

Read the full email after the jump.

I am writing this note to the staff, advisors, our hard working fundraisers, and the campaign leadership around the country who work as hard as our campaign staff. Thank you for all that you have done thus far. Your support has been tremendous. I simply wanted you to end your week with a few thoughts about the campaign in mind as you head into the weekend.

For the last three weeks, the press has been focused on Governor Pawlenty's viability as a candidate and questioned < or in some cases pre-determined < that he, and we, would not remain viable. The hard facts are simply not on their side, and the press' ill-perceived narrative is a far cry from the stamina this campaign possesses, and the path we are actually on.

Here are just a few reasons why:

Today's FEC disclosure reports make this point clearly. We came in second place in Republican presidential fundraising. That's a big deal and a far cry from the narrative promoted in the press. The reality is that Michele Bachmann, Ron Paul, Jon Huntsman, Newt Gingrich, Rick Santorum, Herman Cain, and Mitt Romney all built infrastructures as early as the Governor, and began organizing, yet only one raised more money and most raised far less.

Moreover, to get to our $4-million-dollar range as Huntsman and Bachmann did, one had to loan their campaign $2 million and the other transferred $2 million from a congressional account. We raised $4.5 million dollars and have $2 million COH, with $1.4 million of this available to spend in the primary and no debt. That is, $1,000,000 more than what Gov. Huckabee had on hand at this stage who went on to win Iowa, and just as much as Sen. McCain had on hand at this point who went on to become the nominee (he was carrying $1.7 million in debt). We are better positioned financially than the top two finishers of the 2008 cycle. This is just a fact. Moreover, the only person whose fundraising is stronger is Governor Romney's. It's important to note that keeping up with him at this stage of the game has never been a part of our strategy. We don't need $20 million to defend Gov. Pawlenty's record < they will. We have the budget that leads to success in the early states.

The next charge against us regards our current positioning in the national polls or the Des Moines Register poll. One is relevant (the DMR poll) and the other is not. National polls are largely irrelevant to the race at this stage but are great media fodder. If they mattered this early, Obama would have never beat Clinton, and McCain would have never beaten Giuliani and Thompson who were both leading in polls by a significant margin in July 2007. The DMR poll is relevant because Iowa is where the current contest for us is taking place. However, when they fielded it we had not begun advertising, and the Governor had only been there since his announcement once. Since then we've launched two television ads that have 2,000 points behind them in the Des Moines market, ran 3 radio ads, launched a 6-minute video on the Pawlentys' faith in an email to thousands of Huckabee supporters and conservatives. The Governor's town halls last week drew great crowds, enthusiasm and earned-media in Iowa (read this story: http://bit.ly/qC4sEp).

In four weeks, we will compete in the Ames Straw Poll, a proud tradition for Iowa Republicans and our team, led by Sarah Huckabee Sanders, is working hard and smart to show we're organized. This contest is a dream for candidates like Michele Bachmann and Ron Paul. But instead of dodging it as other candidates have, we have embraced the challenge and look forward to competing. We were in 5th or 6th place a few weeks ago depending on the poll, and the Straw Poll is an important opportunity for us to show progress, which we will do. In the days leading up to the Straw Poll, the Governor will be campaigning in Iowa 20 out of 30 days, our strong message will be on the airwaves, and most importantly, we have the candidate with the best record who can actually get elected President next year. But best of all, we will compete in the Caucus thereafter which is far more representative of voters attitudes and will give all Iowa Republicans an opportunity to see all the candidates over a longer period of time, up close and personal.

We have good news to report outside of Iowa, too. In New Hampshire, we have the best operative in the state, Sarah Stewart, leading our efforts, and yesterday, we announced that Governor Romney's 2008 NH State Chair Bruce Keough endorsed us. We are fortunate to have Tea Party leader Jennifer Horn on board there, too. In Florida, incoming Speaker of the FL House of Representatives, Will Weatherford, and many of his colleagues, have endorsed Gov. Pawlenty. Weatherford joins Gov. Jeb Bush's former Campaign Chair Phil Handy, who is serving on our National Finance Committee. In Georgia, we have Gov. Deal's top-backer, Tricia Pridemore, former Gov. Sonny Perdue, and former Senate President Eric Johnson leading our efforts.

Last Sunday our candidate went on Meet The Press with David Gregory, a venue where you are unlikely to find our competition appear anytime soon. He did a great job and he's comfortable taking tough questions because he actually understands policy, has a great record to tout, and doesn't deliver rehearsed boilerplate talking points like other candidates. That's a huge advantage moving forward < the others cannot hide from this much longer.

But you would be hard pressed to find this counter narrative in some press stories of late. I don't blame them < they have a job to do. That doesn't mean their interpretation is accurate and in this instance they have not extrapolated all of the facts. We all know that campaigns ebb and flow. The reality is things are never as good as they seem, and things are never as bad as they seem. All along we've said we need to raise just enough resources to compete in the early states (check), show well in the straw poll (headed there), do well in the Iowa Caucus and be ready to compete in NH, SC, and beyond.

That's exactly where we are and will continue to be.

With your continued focus, support and energy, Tim Pawlenty will be the
Republican nominee for President and go on to defeat Barack Obama next November. Thank you for all that you do. We could not do this without you.

PS: I also want to personally thank all the staff who, on their own volition, donated to the campaign. That says a lot about our team, and the man you are working for.