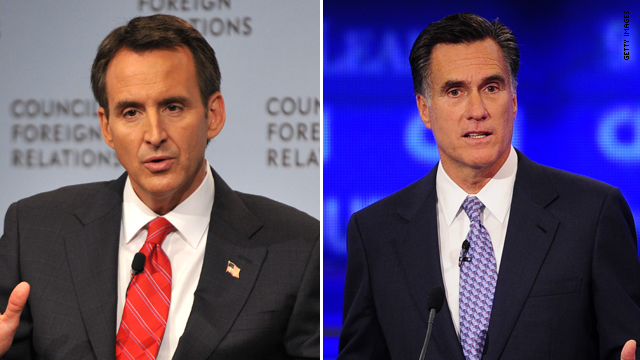 (CNN) – Former Minnesota Gov. Tim Pawlenty continued to hammer rival Republican presidential candidate Mitt Romney Friday for being what he has described as "largely absent" from the debt crisis debate.

"My thoughts on the debt ceiling <http://t.co/yL7G2gw What say you @MittRomney? Help us fight back," Pawlenty tweeted with a link to an appearance on CNBC's Kudlow Report Thursday.

Pawlenty has been critical of the former Massachusetts governor, who has avoided weighing in on day-to-day debt crisis negotiations.

"Conservatives around the country are speaking out against raising the debt ceiling, yet Governor Romney has been largely absent from this debate, just as he was during the health care debate when he was sidelined by his record in Massachusetts," Pawlenty spokesman Alex Conant said earlier this week.

Romney has refrained from commenting on the negotiations, but did weigh in this week by repeatedly pointing to President Obama as the main culprit in the nation's economic crisis.

"We cannot lose sight of the need to move the President toward meaningful fiscal responsibility," Romney said in a statement to CNN earlier this week. "A vote on raising the debt ceiling has to be accompanied by a major effort to restructure and reduce the size of government."

At a campaign stop in Portsmouth, New Hampshire Thursday, Romney again called on the president to bring an end to the stalemate in the talks.

"Come on, Mr. President," Romney said. "You can, by yourself, cut spending, agree to cap the spending and put in place a balanced budget amendment."

The Treasury Department has warned that failure to raise the nation's $14.3 trillion debt ceiling by Aug. 2 could lead to a possible default, which could provoke skyrocketing interest rates and cause the dollar to plummet.

But both parties have thus far been unable reconcile their radically divergent strategies to solve the nation's economic crisis.

Republicans – including both Pawlenty and Romney – have called for "Cut, Cap and Balance" approach, which opposes a debt ceiling increase unless it is accompanied by major spending cuts, a cap in spending, and a balanced budget amendment. But Democrats have denounced such cuts because of the drastic changes they would bring to popular entitlement programs.

In his appearance on the Kudlow Report, Pawlenty said Republicans should force Obama's hand and send the president a bill that "has real reform in it," and "challenge him to veto it or sign it."

Pawlenty also said Congress needs to focus not just on debt reduction, but growth, saying, "We need exceptional growth, and I've got the most specific, most aggressive economic growth plan than any candidate in this race including the president of the United States."