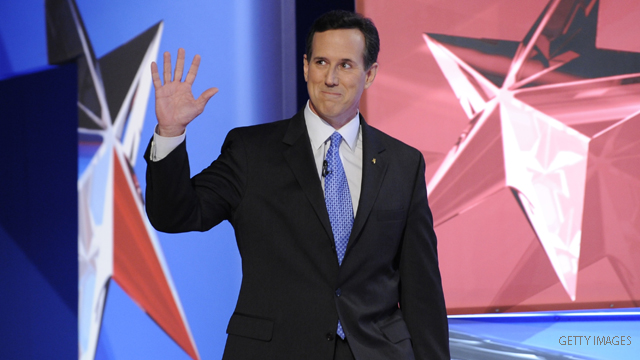 (CNN) - Rick Santorum's presidential campaign says it brought in more than half a million dollars the past three months.

According to a news release Friday morning, the former senator from Pennsylvania raised $582,348 in the second quarter of the year. The campaign says it has $229,000 cash on hand, with no debt.

Santorum announced the formation of a presidential exploratory committee in early May and formally announced for president on June 6.

"In the short amount of time since Senator Santorum has been a candidate for president, he was able to raise a significant amount of resources. It is worth noting that Senator Santorum didn't hold his first official fundraiser until June 22, and between that day and June 30, he raised nearly half of the money he raised as an official presidential candidate," said Amanda Kornegay, finance director for Rick Santorum for President, in a statement.

Last weekend, in an appearance on CNN's "State of the Union" with Candy Crowley, Santorum predicted that he would bring in less than $2 million for the second quarter.

Santorum's haul puts him far behind former Massachusetts Gov. Mitt Romney, who's making his second run for the nomination. Romney reported raising $18.25 million the past three months. Former Minnesota Gov. Tim Pawlenty of Minnesota and Rep. Ron Paul of Texas, who's making his third bid for the White House, each raised $4.5 million in the second quarter.

Former Utah Gov. and former U.S. Ambassador to China Jon Huntsman, who didn't announce until late June, brought in $4.1 million, which included around $2 million of his own money.

Rep. Michele Bachmann of Minnesota is the last remaining major candidate who has not yet reported her figures. Friday is the deadline for the campaigns to officially file their second quarter fundraising numbers with the Federal Election Commission.