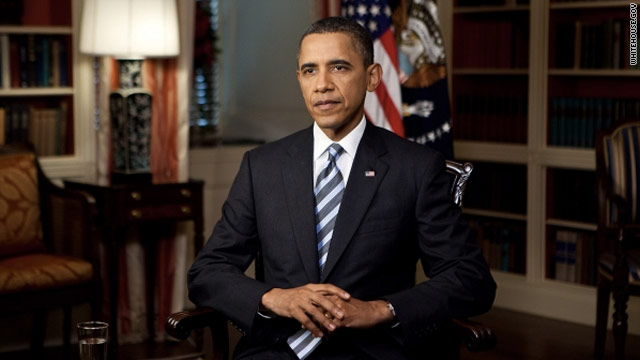 (CNN)-President Barack Obama and Sen. Orrin Hatch rallied for balance during the weekly addresses Saturday, but differed on the types of balance necessary.

“For a decade, America has been spending more money than we’ve taken in” while the national debt continued to rise, Obama said. “Neither party in this town is blameless.”

And he criticized elected officials for being “more concerned with playing politics and serving special interests than resolving real problems.”

Acknowledging a “responsibility and an opportunity” to reduce the deficit as much as possible, Obama argued for a “balanced approach, shared sacrifice, and a willingness to make unpopular choices” to form an agreement on the debt ceiling and deficit reduction.

The president met daily with leaders of both parties to hammer out a deal that will raise the amount of money the federal government can borrow before the nation’s debt exceeds the current allowed limit. The debt ceiling deadline is August 2.

A central issue of the struggle between parties is whether a deal to raise the debt ceiling should include solutions to resolve the deficit, and what those solutions will be. President Obama and fellow Democrats support a plan that will include both spending cuts and tax revenues while Republicans decry any strategy that involves an increase of taxes but favor entitlement reform.

Obama listed “shared sacrifices” he envisions as part of a “balanced approach”: reduced spending on domestic and defense programs, Medicare reform, and revising the tax code to remove tax breaks for the wealthiest Americans. Realizing some compromises “don’t make folks in my party too happy,” the president reasoned that he “wouldn’t agree to some of these cuts if we were in a better fiscal situation.”

“If we’re going to ask seniors, or students, or middle-class Americans to sacrifice, then we have to ask corporations and the wealthiest Americans to share in that sacrifice,” he continued.

Using their examples as a model, the president vowed, “You expect us to get this right…and that’s what I’m committed to doing.”

But Utah Sen. Orrin Hatch said he wants to stop future deficit disasters before they start, and argued for a balanced budget amendment to the U.S. Constitution in the GOP weekly address.

He described debt negotiations as “one of the most critical debates in generations” that are focused on “the size, scope, and shape of our national government.”

Hatch slammed Democrats for a refusal to develop a “legitimate plan to confront our runaway spending” that contributed to the nation’s debt and lashed out at the president whom he accused of refusing to “reform our near bankrupt entitlement programs” while “pushing job-killing tax hikes.”

The six-term-senator had a different memory of the deal brokered between Clinton and House Republicans.

“We’ve been down this road before,” he said. “In 1990 Congress and the president struck a deficit reduction deal that combined spending cuts with tax increases. Unfortunately, while the tax hikes remained, the spending restraint did not, and our debt has marched higher.”

In an effort to learn from past mistakes, Hatch resolved, “the solution to a spending crisis is not tax increases” and proposed passing a balanced budget amendment as a long-term solution for “restoring constitutional restraints on the ability of Congress to spend” and restrict the growth of federal government.

Hatch, who serves as ranking member of the Senate Finance Committee, looked to the states as models to follow, while blasting the Obama administration for dismissing the potential solution.