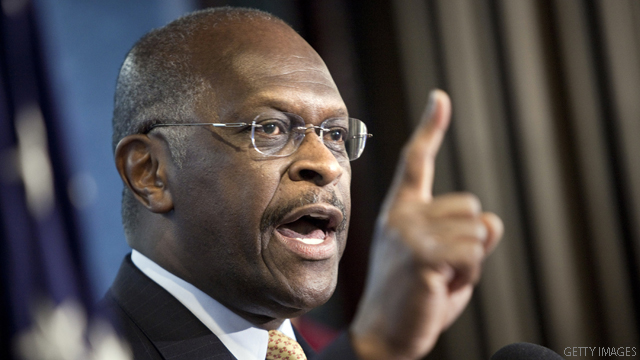 (CNN) - Herman Cain said Sunday he is a more experienced candidate for president than Rep. Michele Bachmann of Minnesota in the battle for the 2012 GOP nomination.

"The choice is real simple," Cain said on "Fox News Sunday," when asked why voters should choose him over Bachmann. "My entire career has been problem-solving, not politics."

Cain and Bachmann have a history with the tea party movement that has helped propel them to national prominence.

The former Godfather's Pizza CEO said they hold similar policy positions, but that as a businessman he has more "direct hands-on" experience and "stronger credentials than literally many of the other candidates."

Although the presidential hopeful said he expects to finish in the top three at the high-stakes Ames straw poll in the first-in-the-nation caucus state of Iowa in August, if he falls short he will not drop out of the race.

"The nomination process doesn't stop with the early caucuses only," Cain said. "The biggest determining factor as to whether I stay in or drop out won't be whether I finish first, second, or third, or fourth. It's going to be the number of supporters that we're getting, and what we are hearing from the people actually out there in the states."