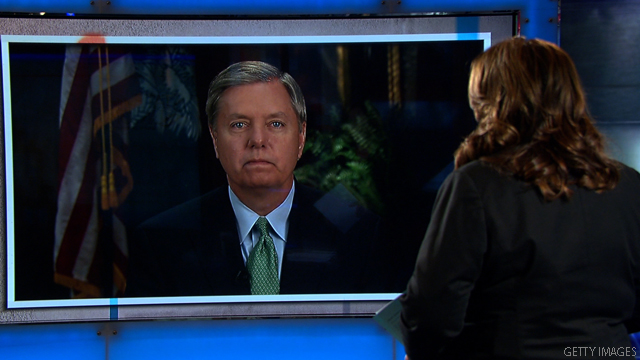 (CNN) - Republican Sen. Lindsey Graham of South Carolina said Sunday that a balanced budget amendment, one of the provisions of the “cut cap and balance” pledge, is the only solution to stave off default on the country’s loans.

“The real deal to limit spending and get us in balance would be an amendment to our constitution,” Graham said on CNN’s “State of the Union.” “Without that we’re just going to talk to each other and run America into the ground.”

Click to watch video
The pledge, which includes budget cuts, caps on future spending and a balanced budget amendment to the constitution, would likely pass through the Republican-controlled House and face more obstacles getting through the Democratic-controlled Senate. But Graham said it could pass the upper chamber and is the only avenue through which the country will make the “hard choices” necessary to raise the debt ceiling, including tackling entitlement spending and closing some tax loopholes.

“What these amendments do is not just say you have to balance the budget, but it puts in place spending limitations that would force us to cut Social Security and Medicare more deeply than even the House budget resolution did,” Lew said.

On Friday President Barack Obama said political leaders do not need a constitutional amendment to “do our jobs.”

The White House and Congressional leaders are attempting to reach a deal before the government potentially defaults on its obligations August. 2. Republicans reject tax increases and Democrats will only agree to reforms in entitlement programs if wealthy Americans pay more in taxes.

Graham signaled there was room for the two parties to negotiate, including how much spending as a percentage of economic production would be allowed under spending caps, and how much congressional support a future effort to raise taxes would require to pass.

When asked if he would consider a "Plan B" to reach a deal, including a debt ceiling agreement being worked out by Senate Majority Leader Harry Reid, D-Nevada, and Senate Minority Leader Mitch McConnell, R-Kentucky, Graham said he is determined to pass the constitutional amendment.

“I am going to focus on Plan A. That, to me, is the only plan that will work. It's the real deal, not a big deal,” Graham said. “I think that’s going to be the Republican position."