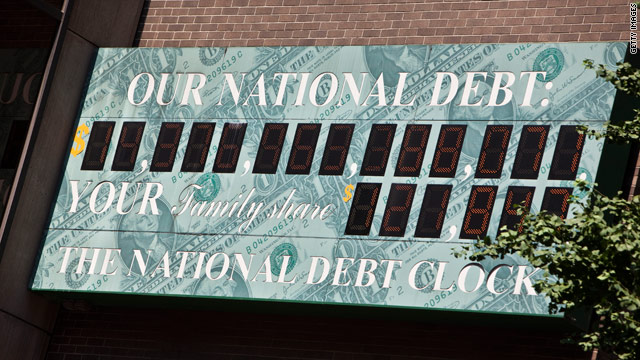 Capital Hill (CNN) – What exactly would happen if Congress does not raise the debt ceiling before Aug. 2?

In this week's American Sauce podcast, we lay out the specifics, including why August is particularly a difficult month for this to happen. We also summarize the debt negotiations so far through the eyes of two Hollywood screenwriters. Listen here.
Leave comments below.

What Happens if Congress Does Not Increase the Debt Limit?
Basics
-No one knows the precise scale of the impact. This is unprecedented.
-But there is broad agreement that hitting the debt ceiling would raise interest rates and lead to immediate, dramatic cuts in government spending.
-Nearly all agree there is risk of harm to the financial markets. There is wide debate over how great the risk is and how much harm would be done, though many, including House Speaker John Boehner, R-Ohio, say if the markets are jumpy it could lead to "catastrophe."

Background
-Congress has until Aug. 2 to raise the debt ceiling without negative consequences
-After that, the government could not borrow funds and would rely solely on incoming revenues.
-Currently, the U.S. borrows approx. 43 percent of the money it spends. (Source: Office of Management and Budget)
-Technically, the United States has already hit the debt ceiling of $14.29 Trillion. But the Treasury has some limited ability to buy extra time, using what Sec. Geithner calls “extraordinary measures”. (What are they? Check out our podcast and cheat sheet here.)
–The Treasury says those “extraordinary measures” will be used up by Aug. 2. Thus if Congress doesn’t act by that date, the United States would actually feel the collision of hitting the debt ceiling. Treasury could no longer shield the country from the problem.

Government
-The federal government would immediately see spending ability cut about 43 percent.
-Treasury Secretary Geithner and his agency would decide which bills get paid first.
-Most experts, and Wall Street, expect the government to pay interest on the debt first. (See "markets" below.)
-After that, the Bipartisan Policy Center estimates Treasury will have to cut 50 percent of spending. Immediately.
-That would force the Treasury to decide between major programs.
-Example: if the U.S. hits the debt ceiling, government could fund Social Security, Medicare, Medicaid and unemployment benefits, but would not have money left for anything else. Thus, no funds to pay troops, secure airports, run prisons, protect nuclear sites, pay any federal civilian worker or run the rest of government. (Source: Bipartisan Policy Center)
-There is some debate over whether funding problems would shift daily, with each day's revenues, or if Treasury could approach the problem more broadly.

Markets and Finances
-The federal interest rates would certainly increase.
-This would happen for at least two reasons: 1) Credit agencies would downgrade U.S. debt and 2) In August nearly $500 billion in U.S. bonds will mature. The Treasury would need to raise interest rates to resell that debt in the middle of a fiscal crisis.
-Those interest rate increases would ripple through the economy, affecting mortgages, car sales and the cost of any new loan.
-Some argue that even if Congress later raises the debt ceiling an interest rate hike would be lasting.
-It is not clear how much interest rates would increase or how fast.
-The interest rate rise and the lowered confidence in U.S. debt could cause financial markets to drop. This is a heavily debated point. Some conservatives, including Rep. Michele Bachmann, R-Minnesota, argue such talk is a scare tactic. But House Speaker John Boehner told Fox News he is concerned that markets could get "spooked" and spiral into a "catastrophe."
-The U.S. dollar would certainly lose value.

Did we forget anything? Goof something up? Leave a comment below.

CNN's Dan Szematowicz and Emma Lacey-Bordeaux contributed to this report.