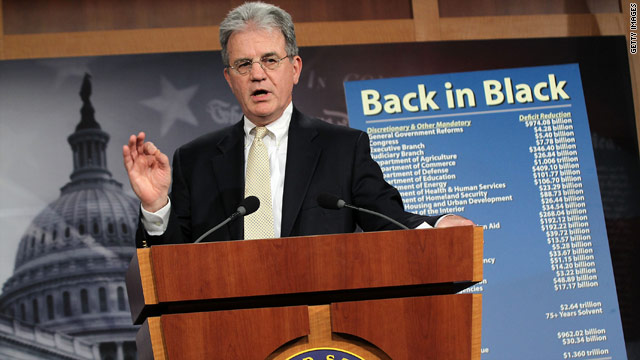 Coburn offers his own budget plan

Washington (CNN) - Sen. Tom Coburn, R-Oklahoma, released his version of a budget plan Monday, saying his ideas would save the country $9 trillion over 10 years.

Coburn, who was once part of the so-called Gang of Six - a bipartisan group of senators working towards a deficit reduction plan - said the time to solve America's debt problem is now. Coburn called the debt the largest national security threat in the country.

"The American people are tired of Washington waiting until the last minute to avoid a crisis when it's a crisis that Washington itself created. " said Coburn during a news conference on Monday. "The crisis, though, is not the debt limit nor its deadline.... (it's the) refusal to make hard choices and reduce a debt that has become our nation's greatest national security threat."

Coburn's plan also looks to get rid of approximately $1 trillion in tax expenditures and loopholes, something members of his own party have criticized.

The senator said that his plan wasn't so much a specific budget, per se, but rather a "menu of ideas." Coburn admitted that some of those ideas on the menu may overlap with those of the "Gang of Six."

"My deal was I was getting frustrated that we (the Gang of Six) weren't fixing the problem big enough," Coburn said.

"The minimum we have to have is $4 trillion and people still don't get that," said Coburn. "You're trying to send a signal to the international financial community that you're on the way to getting well."

The senator, who is also a medical doctor, continued with the medical analogies and called out his fellow colleagues for not being bold enough and worrying only about the political ramifications of a budget deal.

"We need a bunch of spinal transplants in both parties," said Coburn.