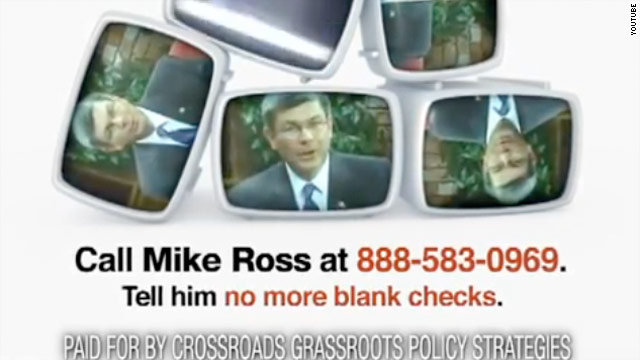 The spots are the third installment from the group this summer and will air for two weeks backed by $1.4 million. Monday's release follows national and state ads that aired as part of the larger $20 million campaign.

The 30-second spots juxtapose the Democratic House members voicing their support for fiscal discipline with their votes on large spending bills like the stimulus package.

Crossroads GPS, an arm of American Crossroads, spent $70 million in the 2010 midterm elections and has pledged to raise $120 million for the 2012 cycle.

Democratic Reps. Mike Ross of Arkansas, Jim Matheson of Utah, Kurt Schrader of Oregon, Heath Shuler of North Carolina, Bill Owens and Tim Bishop of New York, Ben Chandler of Kentucky, Leonard Boswell of Iowa, Jerry Costello of Illinois and Lois Capps of California, all considered vulnerable in the next election cycle, are the focus of the district-specific ads.

"President Obama and his congressional allies have already wasted hundreds of billions of our tax dollars, and we need to send them the message that they don't deserve another penny in taxes," President of Crossroads GPS Steven Law said in a statement.