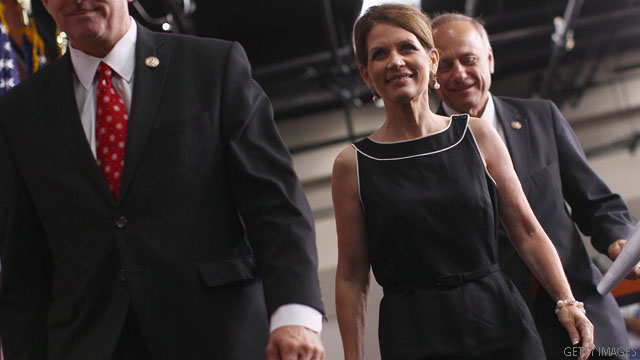 This follows much grumbling in the the gay and lesbian community regarding the congresswoman's policy positions and controversy surrounding the Christian counseling business co-owned by Bachmann and her husband.

The gay conservative group requesting a meeting with Bachmann is GOProud. The group supports traditional conservative issues such as limited government, lower taxes and a strong foreign policy.

On Monday, GOProud's Executive Director explained to CNN the intent of the meeting request.

"We intend to discuss the issues that gay conservatives are concerned about," Jimmy LaSalvia said. Among the group's 10 legislative priorities listed on its website are defeating what it calls "any anti-gay federal marriage amendment." Nine other priorities concern issues such as cutting government spending, "defending the Constitution," and health care reform.

LaSalvia added that GOProud is requesting meetings with all the GOP presidential candidates, and that some meetings have already happened.

A representative from Bachmann's campaign told CNN they have not seen the request, but are sure the congresswoman will consider it.

Recently there has been a focus on Bachmann's position on issues of concern to the gay community.

Accusations recently emerged that a Christian counseling business owned by the candidate and her husband encourages homosexual clients to become straight. And as a senator in the Minnesota legislature in 2004, Bachmann called for an amendment to the state constitution that would block gay marriages in other states from being recognized in Minnesota.

"If we allow this to happen, group marriage, polygamy, and much worse would not be far behind," Bachmann said in a video to her supporters at the time.

Currently, Bachmann opposes same-sex marriage. At the recent Republican presidential debate in New Hampshire sponsored by CNN, WMUR & The New Hampshire Union-Leader, Bachmann said: "I do support a constitutional amendment on marriage between a man and a woman. But I would not be going into the states to overturn their state law."

LaSalvia noted he disagrees with Bachmann regarding a federal amendment to define marriage as between a man and a woman. "I happen to be gay and I have an understanding of the experience of a gay person," he said, adding, "I would welcome the opportunity to discuss that and many other things with her."

LaSalvia noted his group and Bachmann have areas of common ground.

"I certainly agree with Michele Bachmann on a lot of stuff. We agree with her on a lot of the fiscal stuff. She's absolutely dead right when it comes to the situation our country is in now and the need to put our fiscal house in order," LaSalvia said.

He also noted that voters, including gays and lesbians, are getting to know all the Republican presidential candidates.

"I think we'll get a much better sense of who they are, who Michele Bachmann is, as this process unfolds….You know, she hasn't talked about this much."

- CNN's Jim Acosta and Erika Dimmler contributed to this report.