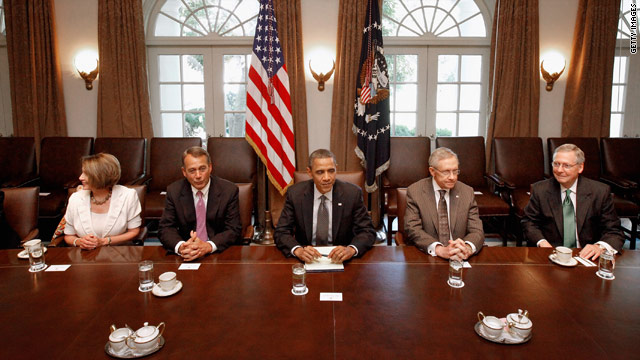 Poll: Debt ceiling deal should include cuts and tax increases

According to a CBS News Poll released Monday, 66 percent of Americans say an agreement to raise the amount of money the nation can borrow should include both spending cuts and tax increases.

More than half of Republicans say the agreement should be balanced and roughly seven out of ten Democrats and independents say the same. More tea party supporters also agree, since 53 percent say any deal should include both spending cuts and tax increases.

Republicans and adults who identify with the tea party are more likely than Democrats or independents to support a plan that only includes spending cuts. Almost four in 10 Republicans favor using spending cuts alone to reduce the deficit and 44 percent of tea party supporters agree. Twenty percent of Democrats would leave tax increases out of a debt ceiling deal and include cuts only; 28 percent of independents say the same.

Despite differences over whether the United States should be allowed to borrow more money and the kind of plan that should be reached to make that happen, most Americans want Democrats and Republicans to make a deal. Three out of four say they'd rather see leaders reach an agreement they do not fully support than see the United States default.

The CBS New Poll was conducted by telephone among 810 adults nationwide from July 15-17. It has a sampling error of plus or minus four points.