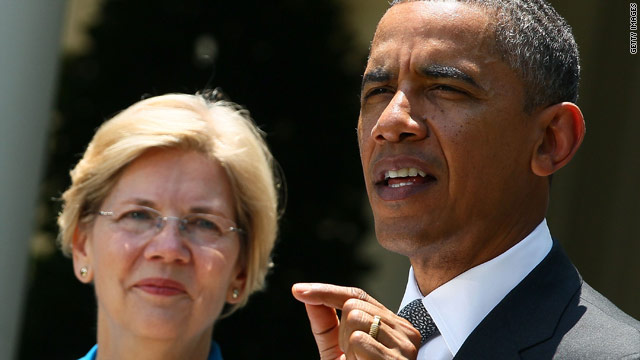 She wouldn't confirm or deny current thoughts of a Senate challenge to Massachusetts GOP Sen. Scott Brown, but she did reveal where heavy thinking may take place in an interview with CNN anchor Wolf Blitzer Monday.

"I've got to go home to Massachusetts. I've got to get back in the house I've lived in for 15 years and settle in. And then I'll think about my future," she said.

What is troublesome to the acting head of the agency are charges that she is controversial in any way.

"I really don't get it," she stated. "The stuff I work on are things like how bad fine print is…and why it shouldn't take an army of folks, of lawyers, to be able to interpret a mortgage agreement for you," she said.

"What is the one thing I've done that makes me controversial? I think this is politics," she continued.

"Rich has always had my strong support because he is tough and he is smart-and that's exactly the combination this new agency needs," the former law professor said.

She echoed those sentiments Monday, refuting any disappointment over not receiving the nomination herself. "My job was to set this agency up and it was an enormous privilege to be able to do that," she said in an interview for CNN's Situation Room.

"One of the people I recruited right from the beginning was Rich Codray…This is the week that the president makes a nomination for someone to lead this agency going forward. That's a good thing."

Warren also held nothing back while addressing threats by top Republicans to block confirmation of any person nominated to lead the new agency.

"We started this fight two years ago," she said, recalling resistance to calls for a protective agency following the nation's financial crisis.

"Senator Shelby and others who were his allies did not want any consumer agency at all. And if it absolutely was the case politically that there had to be one, they wanted some weak agency that couldn't get anything done. We had that fight and then we had a straight-up vote on it…That side lost," Warren asserted.

"And here we stand, a year later with the minority saying 'I don't like how that came out.

I think I have the capacity to stick a stick in the spokes, unless the majority will do what the minority wants it to do.' That's not how democracy works," she countered.