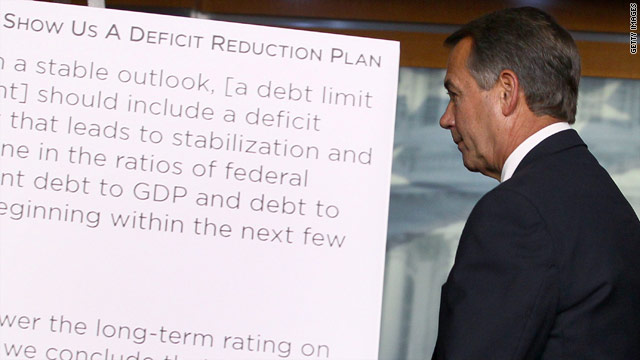 Frustration over debt negotiations a forecast for 2012?

Washington(CNN)-Should lawmakers be concerned about repercussions from action taken during the debt-ceiling debate reverberating to 2012? Two new polls indicate Americans are already thinking that far ahead.

According to a Washington Post/ABC News poll released Tuesday, eight in 10 are either “dissatisfied or “angry” about the way federal government is working, the highest number since the 1990s. The frustration comes at a time when negotiations to raise the amount of money that the nation can borrow constantly stop and start and the heels of negotiators dig in.

And 63 percent say they’re inclined to look around when the time comes to elect new representatives in November 2012.

But even Republicans are holding representatives of their own party accountable for the debt-ceiling-deal stalwart. Almost six in 10 say the GOP is too resistant to a deal.

When it comes to the president’s leadership, 60 percent give Obama negative marks on how he’s handling the deficit and 57 percent disapprove of his treatment of the economy. If voters choose to look for Republican alternatives, the Washington Post/ABC News poll reflected a new top three for the GOP.

The Washington Post/ABC News poll ranked Romney and Bachmann at the top of the GOP field with Bachmann rising 13 percentage points from one month ago. Absent from the poll is former Alaska Gov. Sarah Palin. Still publicly mulling over a presidential bid, the 2008 GOP vice presidential nominee has not yet announced her 2012 intentions. But in a recent Quinnipiac University poll, Palin closely trailed Bachmann.

The NBC/Wall Street Journal poll was conducted among 1,000 adults by telephone from July 14-17. It has a sampling error of plus or minus 3.1 percentage points.