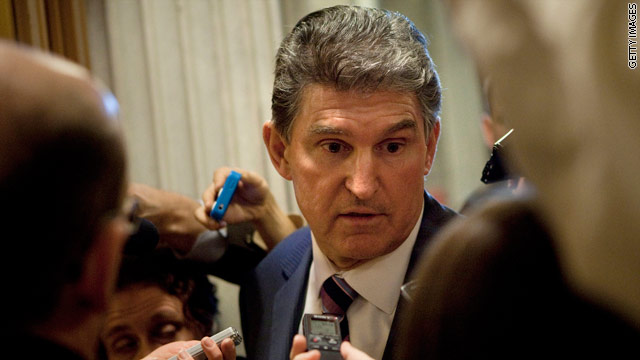 Washington (CNN) - A bipartisan Senate plan to slash the nation's debt by about $3.7 trillion over the next ten years got a largely positive reception Tuesday when presented to about 50 senators in a closed meeting in the Capitol.

The plan was offered by the so-called Gang of Six debt negotiators. However, with some final details still left to sort out on the long-sought compromise, it was not clear if the proposal would have enough support – or time - to play a role in separate congressional negotiations to increase the debt ceiling by August 2nd.

"We've gone from a Gang of Six to a Mob of Fifty," said an upbeat Sen. Joe Manchin, D-West Virginia, as he left the meeting.

But Manchin stopped short of supporting the proposal, saying only that it had "great promise."

Sen. Kent Conrad, D-North Dakota, who is the Budget Committee chair and a member of the Gang of Six, praised the proposal.

"We've come up with a plan and it's comprehensive and it's balanced and it changes fundamentally the trajectory of our debt," he said.

Sen. Tom Coburn, R-Oklahoma, who was an original member of the gang but dropped out because he wanted deeper cuts to entitlement programs, said Tuesday he had rejoined the gang.

The complex plan – hammered out over months of steady negotiations - envisions deep spending cuts to discretionary spending and entitlement programs to make up about three-quarters of the savings. The remaining quarter would come from increased revenues achieved through tax reform.

"What you'll see is significant amount of revenue generated out of the tax reforms and reductions in the (marginal) rates," Coburn said.

Sen. Joe Lieberman, I-Connecticut, said senators are anxious to make a serious dent in the country's $14.3 trillion debt and many are worried an emerging debt ceiling compromise senate leaders are working on would not do enough.

"I think what happened this morning is that the Gang of Six began to turn into a bipartisan majority of senators who want to solve a national problem instead of play partisan politics. It got very emotional in there," Lieberman said. "This is the moment because everybody sees the process drifting towards a kick-the-can down the road response, which is embarrassing."

However, Sen. Rob Portman, R-Ohio, a budget director under President George W. Bush, cautioned that it might be too late for the gang's work to be included in the debt ceiling process.

"This process is moving pretty quickly and obviously the House and White House have to be brought into it. It's a challenge."

Conrad said they hoped to hear back in 24 hours whether senators think there is enough Senate support to move forward with the plan. It would take 60 votes to get through the senate.

The original goal of the gang was to implement the recommendation of President Obama's fiscal commission, which called for $4 trillion in savings over ten years. In addition to Conrad and Coburn, its members include Democratic Senators Dick Durbin of Illinois and Mark Warner of Virginia and Republicans Saxby Chambliss of Georgia and Mike Crapo of Idaho.