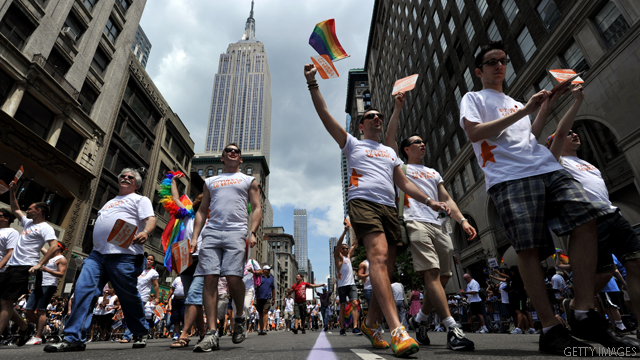 On July 24, the first day New York's recently passed marriage law goes into effect, the city will conduct a public lottery to allow 764 couples to marry, according to a state press statement Tuesday.

Bloomberg, Council Speaker Christine Quinn and City Clerk Michael McSweeney made the announcement due to the high demand for services, they said in the announcement. The lottery, which started at noon Tuesday, will remain open until noon Thursday on the City Clerk's website.

There will be a separate lottery for each of the City Clerk's five borough offices and the winners will be notified Friday by noon.

New York Democratic Gov. Andrew Cuomo signed the law to allow same-sex couples to legally wed on June 24 after it passed through the state Senate.

Bloomberg said the lottery is "the fairest way to determine who gets the chance to wed" and ensures couples do not walk away disappointed.

"We are going to make history on Sunday, with the eyes of the nation once again turning to New York City," Bloomberg said in the statement. "Nobody puts on big events like New York and we will be ready on Sunday for what will no doubt be an historic and unforgettable moment."