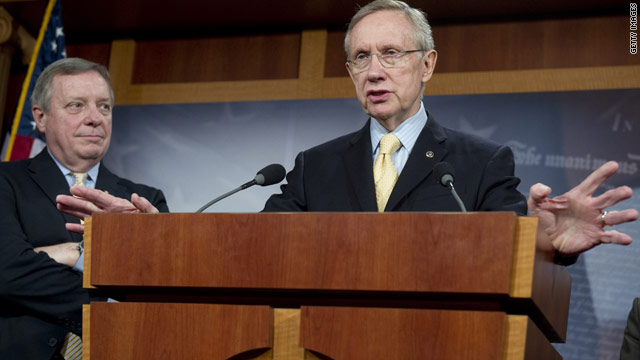 Washington (CNN) - The top two Democrats in the Senate said they don't think there is enough time before the debt ceiling is reached Aug. 2 to pass the comprehensive debt reduction plan unveiled Tuesday by the Gang of Six debt negotiators.

"The Gang of Six plan has not been drafted nor has it been scored by the CBO (Congressional Budget Office)," said Sen. Dick Durbin of Illinois, the Assistant Majority Leader and a member of the debt gang who supports the compromise. "It's not ready for prime time."

Asked specifically if the $3.7 trillion plan can be implemented as part of the debt ceiling negotiations, Durbin replied, "No it can't."

Majority Leader Harry Reid of Nevada expressed similar concerns and noted the Constitution requires that revenue bills originate in the House so the Senate's hands are tied until the House acts.

"I don't want to do anything to jeopardize the enthusiasm of the Gang of Six," Reid said. "But I am the person that runs the Senate and I understand what the rules of the Senate are."

Reid said he's open to incorporating some elements of the proposal into a separate bill that he and Senate Republican Leader Mitch McConnell of Kentucky are drafting as a last-chance option to prevent the U.S. government from defaulting on its debt.