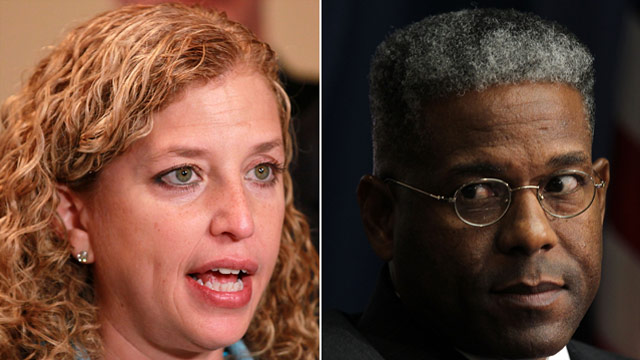 Washington (CNN)-The debt debate got ugly over the internet between two Florida representatives on either side of the House aisle. Freshman Congressman Allen West ripped into Congresswoman Debbie Wasserman Schultz over e-mail following her comments on the House floor Tuesday.

Calling the Democratic National Committee Chair the "most vile, unprofessional, and despicable member" of the House, West said, "Look, Debbie, I understand that after I departed the House floor you directed your floor speech comments directly towards me. Let me make myself perfectly clear, you want a personal fight, I am happy to oblige."

CNN obtained a copy of the e-mail from a congressional source.

Wasserman Schultz offended the tea party favorite by directly disparaging his support of the "Cut, Cap and Balance" bill that went on to pass the House of Representatives late Tuesday-after he left the floor.

West fired back in his message, challenging the four-term Democrat.

"If you have something to say to me, stop being a coward and say it to my face, otherwise, shut the heck up. Focus on your own congressional district!" he railed.

"From this time forward, understand that I shall defend myself forthright against your heinous characterless behavior…You have proven repeatedly that you are not a Lady, therefore, shall not be afforded due respect from me!"

But Jonathan Beeton, a spokesman for Wasserman Schultz, charged that West's grievance was not actually with the congresswoman.

"I don't think that Congressman West is upset at the Congresswoman, but rather with the fact that she highlighted that he and other Republicans are once again trying to balance the budget on the backs of seniors, children and the middle class," Beeton said. "The truth hurts."

And West refused to leave his gripe on the House floor. Signing the e-mail "Steadfast and Loyal," West vowed, "I am bringing your actions today to our Majority Leader and Majority Whip."