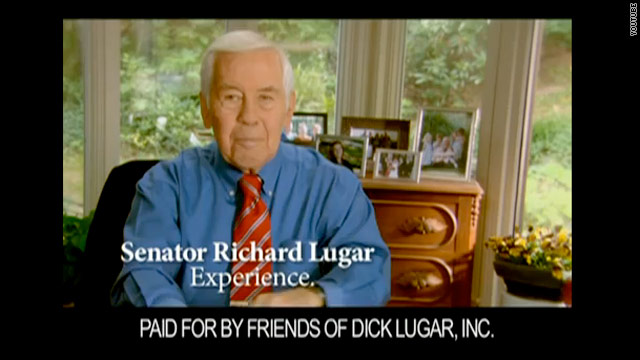 (CNN) - Longtime Republican Sen. Richard Lugar of Indiana is highlighting what could be his biggest liability as he battles for a seventh term in office.

In his first television commercial of his 2012 reelection bid, Lugar touts himself as a needed veteran GOP leader who is battling back alongside rookie Republican lawmakers against the Obama administration, saying in the spot that "I hope you'll agree that a veteran, fighting alongside our new recruits, will help."

Lugar's campaign confirms to CNN that the ad starts airing on television statewide in Indiana on Wednesday and will run through July 29. In what appears to be an ode to tea party activists and other grassroots fiscal conservatives, Lugar says "for 35 years, I've battled for balanced budgets and less government. I've helped beat tough times before. And we can do that again."

The commercial also includes two videos from the 1980's of a younger Lugar working alongside President Ronald Reagan.

Lugar's ad follows the release statewide of a commercial by the fiscally conservative Club for Growth which attacks the senator.

"Thirty-five years. That's how long Richard Lugar has been in Washington. What's he done about our debt?" says the narrator in the Club for Growth ad, which goes onto criticize some of Lugar's votes in recent years. "Lugar voted for the Wall Street bailout, the car company bailouts, the Fannie Mae and Freddie Mac bailout."

Lugar is facing a primary challenge from the right, from Indiana State Treasurer Richard Mourdock, who announced his bid on February 22. Lugar has a huge advantage of Mourdock when it comes to campaign cash. Lugar raised $900,000 last quarter and had $3.54 million cash on hand as of July 1. Mourdock brought in $300,000 in fundraising in the second quarter.

Beside the Club for Growth, some local groups, like Hoosiers for a Conservative Senate, and some national organizations, like FreedomWorks, are trying to find a consensus conservative candidate to take on Lugar in next year's GOP Senate primary.

The winner of the May 8, 2012 GOP primary would likely be considered the favorite to win the general election.