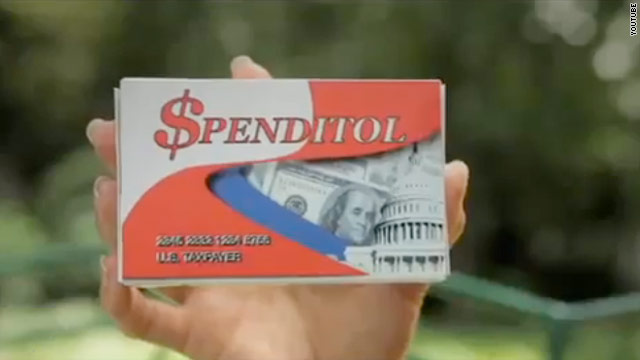 (CNN) - Is it a political ad, or a commercial from "Saturday Night Live"?

Spending $1.15 million, the conservative group Concerned Women for America took out its largest ad buy ever on "Spenditol," a spoof that looks like an ad for a pharmaceutical product but actually targets spending in Washington.

The 60-second parody starts with a woman expressing concern over "chronic pain" from rising gas prices and a lagging economy.

"Then I learned about a new miracle drug–made in Washington, D.C.: Spenditol," she said, holding up a fake medicine box. In the ad, the woman can be seen walking around her home and doing chores as her kids play in the backyard.

"Spenditol is Washington's answer to all the painful problems Americans face," she said, smiling. "How to borrow $800 billion dollars for a stimulus that didn't create jobs or fix the economy? Spenditol."

As with any drug, "Spenditol" also comes with its own side effects:

"A mountain of government debt piled on our kids. A sudden loss of freedoms. Higher prices for everything," said a male announcer over the commercial. "Ask your doctor or Congressman if your conscience is strong enough for Spenditol."

The ad ends with a call to action, asking viewers to contact the White House and Congress.

"Tell them: Stop spending…it all."

The ad will begin to air Thursday and run for a week in four states with Senate seats up for grabs–Florida, Ohio, Nebraska and Montana–as well as national cable news channels.

"We particularly wanted to target women and use humor as a tool for teaching about a very scary subject," said Penny Nance, the group's CEO.

While the ad doesn't specifically mention the ongoing debt talks between the White House and Congress, Nance said Concerned Women for America strongly supports the "Cut, Cap, and Balance" bill passed by the House Tuesday. The bill would require a Balanced Budget Amendment, as well as large spending cuts and a cap on spending, in legislation that would raise the federal debt ceiling by Aug. 2.

Nance said the group will oppose any plan that includes tax increases, as she said they would "force women back into the work force," in addition to causing more spending cuts within families.

"We plan to be part of the national conversation on the debt ...as long as we need to be," Nance said.