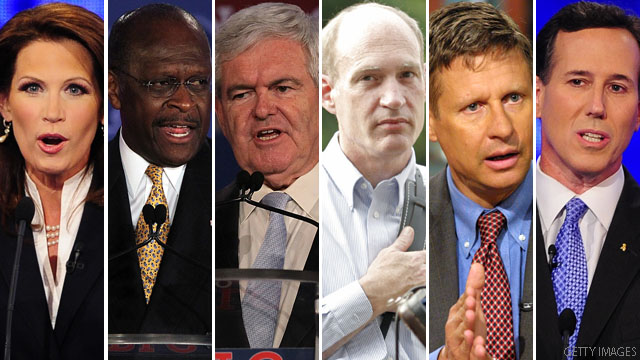 Washington (CNN) - Getting politicians to keep their answers short is tough. On Wednesday, six of them will be forced to by the confines of Twitter.

In what's being billed as "groundbreaking," six of the 10 major Republican presidential candidates will participate in a Twitter presidential debate. They will answer questions in 140 characters or less. That, of course, is the maximum number of characters allowed per tweet. Organizers of the debate say they will allow the candidates to type multiple tweets - but that short answers are still encouraged.

It will be hosted by radio talk-show host Rusty Humphries, who said in a statement: "I can't wait to see what a politician can say in 140 characters."

Conservative political commentator S.E. Cupp will also moderate. Though none of the candidates will be seen or heard from during the debate, organizers say each candidate will send a video message for viewers assembled on site in Concord, New Hampshire. Most of them will be tea party members and supporters. Others watching online will be able to pose questions via Twitter.

Meanwhile, there have been snafus and confusion ahead of the event.

First, a press release from July 5 listed former Minnesota Gov. Tim Pawlenty as "confirmed" to attend along with the others. That release did not mention Johnson at all.

When asked about the discrepancy, Pawlenty adviser Alex Conant said in an email, "We never confirmed." Pawlenty will not attend the debate.

An official with a public relations and political consulting firm helping to promote the event admitted there was a communication problem.

"Somebody confirmed verbally ... that was my understanding," Audrey Mullen of Advocacy Ink told CNN. "I don't know who was talking to who," Mullen added. "They're going back and forth to figure out who said what, when."

Dustin Stockton of TheTeaParty.net told CNN: "That's a miscommunication between the guy who was doing our scheduling" and Pawlenty's campaign.

"We apologize to the former governor for just accidentally getting him in there. We thought we had him confirmed."

Also, after listing which GOP hopefuls were "confirmed," that same July 5 press release boasted: "with the rest of the major candidates expected to confirm soon."

The other candidates will not attend the debate. Debate organizers have told CNN that former Massachusetts Gov. Mitt Romney, former Utah Gov. Jon Huntsman, Rep. Ron Paul were invited - even Texas Gov. Rick Perry, who is considering a presidential bid but has yet to jump into the race.

There was also a snafu concerning the debate moderator.

Organizers initially said that conservative strategist Dick Morris would guide the debate. Now, he will not. Mullen explained that there was a scheduling problem.

As for the debate format, might forcing candidates to address complicated issues in 140 characters or less dumb down the issues to simple messages and campaign slogans?

"I think the exact opposite is true," Stockton recently told CNN. "It forces them to really have to answer the question."

"Everybody will have the opportunity to respond at the same time," Stockton said. "You'll be able to compare each candidate's answers side by side. And since it's a silent medium, the transcripts really kind of rip out somebody's oratory skills to evade a question."