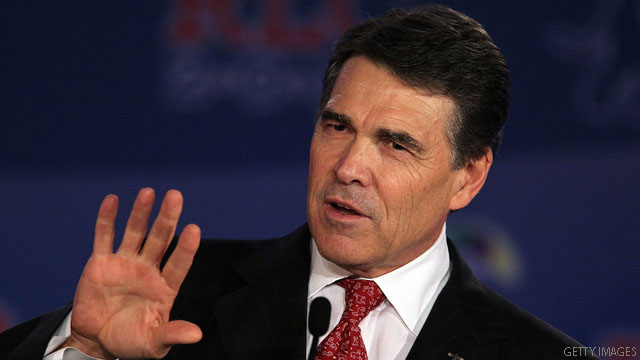 Perry may not speak at 'The Response'

(CNN) - Despite taking a lead role in an upcoming national prayer event, Texas governor Rick Perry may not speak at the religious gathering.

Organizers of "The Response," a day of Christian prayer and fasting set for August 6 at Houston's Reliant Stadium, say Perry's role has yet to be determined.

The Texas governor is considering whether to run for President, recently telling a Des Moines newspaper he is starting to feel "called" to jump into the race.

Perry is featured prominently on "The Response" web site inviting Americans to join him in prayer for what organizers describe as a "nation in crisis."

"We need God's help. That's why I'm calling Americans to pray and fast the way Jesus did," Perry says in a video message on the event's web site.

A spokesman for The American Family Association, a Christian conservative organization that is in charge of the event, said Perry's role is still being worked out.

"There will be a handful of speakers, in addition to a number of folks
leading prayer, plus some time for praise and worship music," AFA spokesman Eric Bearse said.

"Whether the governor will speak has not yet been decided at this point," Bearse added.

Critics say the governor's participation in a prayer event blurs the separation of church and state.

At a news conference on Monday, Perry was asked about some of the controversial comments made by the event's organizers and official "endorsers."

One endorser, Pastor John Benefel once referred to the Statue of Liberty as a "demonic idol."

Perry said it was unfair to tie him to the opinions expressed by some of the event's participants.

The governor also tried to downplay his comments about being "called" to run.

Perry explained he is being called by his faith, friends and family.

"My mother may call me for dinner," Perry said.