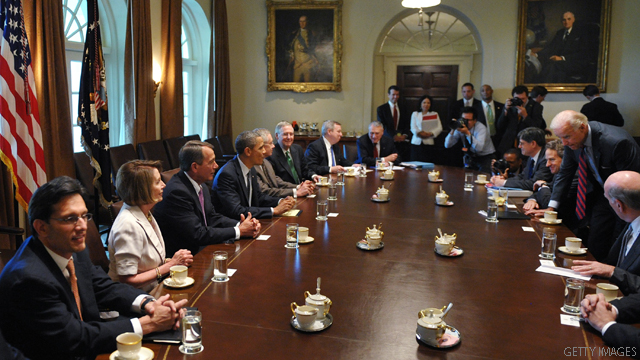 The aides, who spoke on condition of not being identified, said the possible deal remained in limbo over disagreement on whether to extend Bush era tax cuts for families earning more than $250,000 a year, and nothing has been agreed to yet.

The possible deal would include spending cuts expected to total $1 trillion or more that were agreed to in earlier negotiations led by Vice President Joe Biden, the sources said. It also would reform entitlement programs by changing the eligibility age for Medicare over time and using a more restrictive inflation index for Social Security benefits, according to the sources.

On taxes, it would permanently extend the Bush era tax cuts for families earning less than $250,000 while allowing the cuts to expire at the end of 2012 for those earning more than that, the aides said. At the same time, the deal would include a commitment to reform the tax code next year, which is expected to lower all tax rates and eliminate loopholes and subsidies, the sources said.

However, the sources said, House Speaker John Boehner wants the deal to make all the Bush tax cuts permanent while keeping the commitment to tax reform. Republicans oppose any tax hikes, and their resistance has been a major obstacle to any deal in the negotiations so far.

Some sources said the deal would work in two stages, with spending cuts and a debt ceiling increase occurring right away, with the entitlement reforms and tax reforms occurring later.

House Majority Leader Eric Cantor told reporters on way to House floor, "I am unaware of any deal that has been struck. There are all kinds of options on the table."

A spokesman for House Speaker John Boehner – Michael Steel– tells CNN’s Kate Bolduan: "While we are keeping the lines of communication open, there is no 'deal' and no progress to report. We are still focused on the 'Cut, Cap, and Balance' bill that passed the House with bipartisan support, and hope the Senate will take it up as soon as possible."