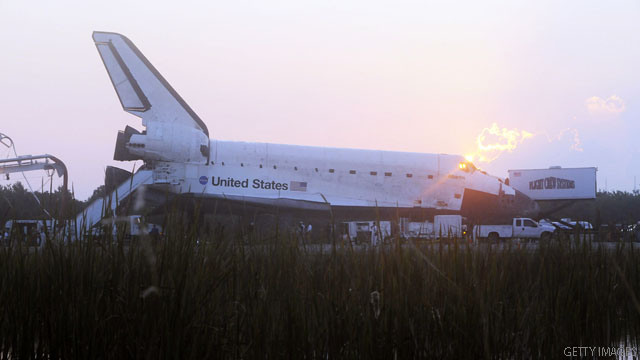 Washington (CNN) - Half of all Americans say that the end of the space shuttle program is bad for the country, according to a new national survey released as the last shuttle mission came to a close.

And a CNN/ORC International Poll also indicates that most of the public wants to U.S. to develop a new spacecraft that will send astronauts into space, but a majority say they would prefer that private enterprise rather than a government program achieve that goal.

The survey's release came just a few hours after the shuttle Atlantis glided back to Earth early Thursday - capping a 30-year program that saw hundreds of astronauts go into space. The landing at 5:57 a.m. ET went off without a hitch at Florida's Kennedy Space Center.

Half of those questioned in the poll say the end of the space shuttle program will be bad for the country, with 16 percent saying it will be good, and one-third saying it will have no effect. Three-quarters say the U.S. should develop a replacement spacecraft that will be capable of sending astronauts back into space.

"Men are more likely than women to think that the U.S. should develop a new spacecraft," says CNN Polling Director Keating Holland. "Eight in ten men favor replacing the shuttle, compared to roughly two-thirds of women. But there is little partisan divide on this topic - more than seven out of ten Democrats, Independents and Republicans want to see the U.S. develop a new spacecraft."

Only 38 percent say that the country should rely on government to run manned space missions in the future; with 54 percent saying they would prefer that private companies handle spaceflight in the years to come.

The public is confident that this will eventually happen: Nearly nine in ten say the U.S. will achieve that goal.