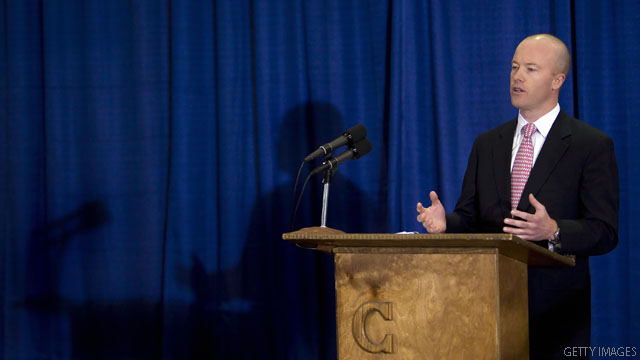 Despite his years of service inside the beltway, Stanzel said the economic failures in Washington, D.C. are on his side, an argument that closely matches those of GOP party officials.

The former deputy press secretary to then-President George W. Bush said he will make a final decision about a bid after his September wedding. But he was quick to tie the current economic crisis to Cantwell and said Evergreen State voters are ready for new leadership in the Senate.

"I really think voters of this state are hungry for principled leadership which addresses the serious fiscal crisis which politicians like Maria Cantwell have caused," Stanzel told CNN. "Sen. Cantwell and her allies are burying our children and grandchildren in a blizzard of debt that has got to stop."

Stanzel said the politicians in Washington, D.C. are too worried about keeping their jobs to tackle entitlements that would help the fiscal crisis.

"Rather than tackle the big issues like getting America back to work, the only job program Congress has is over job preservation," Stanzel said.

Stanzel has a long history in the nation's capital and in politics with his service in the White House, as a Congressional staffer and as a campaign aide to President Bush. But when his service concluded, he chose to live in Washington state, Stanzel said.

"I'm very proud of my service to President Bush," Stanzel said. "It was an honor to work for him and he was president during some of the most consequential times."

Matt Barreto, a political science professor at the University of Washington, said Stanzel's biggest obstacles if he runs will be his ties to Bush and his thin record on jobs and the economy.

"I can't think of anybody in my entire imagination that could beat Cantwell in Washington State," Barreto told CNN. "It's an extremely Democratic state regardless of what people think."

Stanzel has made Washington state his home now for the second time. He founded Stanzel Communications, a public relations strategy firm in the state and recently served as campaign manager against the state initiative 1098, a measure that would have placed an income tax on the wealthiest Washingtonians while lowering some business and property taxes. Voters rejected the proposal last year.

Cantwell raised $1.4 million in the second quarter of this year, leaving her with approximately $2.3 million cash-on-hand toward her bid to win a third term. She won her 2006 election against Republican businessman Mike McGavick with 60 percent of the vote.

But Stanzel said votes, like those against 1098, are a sign to him that voters in the state are becoming more conservative.

Washington State Republican Party Chairman Kirby Wilbur made the same argument and said 2012 will be the year for Republicans in Washington because of the economy.

"The Obama administration and Sen. Cantwell own this economy and have to defend it," Wilbur told CNN.

He also said Cantwell has neither the class nor the political talent of fellow Democratic Sen. Patty Murray, who won reelection to the Senate in 2010, making him more optimistic about this cycle.

Wilbur said he expects more candidates to get into the field by the fall or winter and mentioned Stanzel, former Seattle news anchor Susan Hutchison, who lost a local election in 2010 and Port of Seattle Commissioner Bill Bryant as strong possibilities.

Although he said the current crop of candidates would not have been good enough in 2008 or 2006, when Republicans lost seats in the House and Senate, in 2012 he said state Republicans "know what we've got to do and know the economy's on our side."

National political handicappers Stu Rothenberg and Charlie Cook list the state as "Democratic favored" and "Likely Democrat" respectively, leaving states like Nebraska, Missouri and Montana at the top of the possible pick-up list for Republicans. Brian Walsh, spokesman for the National Republican Senatorial Committee would not comment specifically on undeclared candidates in the state.

"Ultimately the Republican nominee will be chosen by the Republican voters in Washington and we fully intend to support whoever that is next year," Walsh told CNN. "We ran a competitive race in Washington last cycle and by any measure Sen. Cantwell is in a less formidable position than Patty Murray was in last year."

He also said the state party is organized early because of the unknown factors in the next election.

"We don't take anything for granted," Pelz told CNN. "The 2012 presidential race is a fluid situation and all races will reflect the presidential race and the economy ... we don't know what the electorate will think in 2012."

Jared Leopold, a spokesman for Cantwell said the senator is "focused on getting our economy back on track and fighting for Washington state families in the U.S. Senate."