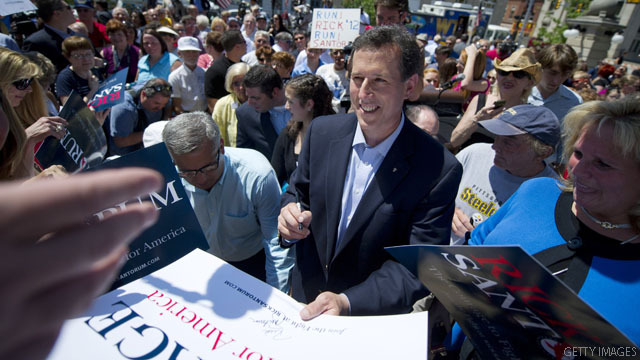 (CNN) - Less than a month before the crucial Ames Straw Poll in Iowa, several Republican presidential candidates are focusing increased attention on the first-in-the-nation caucus state.

Former Sen. Rick Santorum of Pennsylvania officially announced Thursday that he and his family will reside in the state for the next three weeks while they try to win over Hawkeye State voters.

"I cannot wait for my entire family to experience the many sites and sounds our heartland has to offer," Santorum said in a statement.

Standing in an ice arena in his hometown of St. Paul, Minnesota, the 2012 candidate said his record as governor can make America a leader again.

"To come back, we need a leader with a prove record, not just rhetoric," Pawlenty said in the spot. "Join me and prove the experts wrong."

Pawlenty, Santorum, Rep. Michele Bachmann of Minnesota and Rep. Ron Paul of Texas, who have all invested considerable time and resources in the state, will continue to campaign there. Pawlenty will visit 17 cities over the next week and Santorum will hit 50 cities as part of a three-week tour.

The August poll is an important barometer for the strength of the campaigns and a poor showing could severely impact their chances in the early voting state.