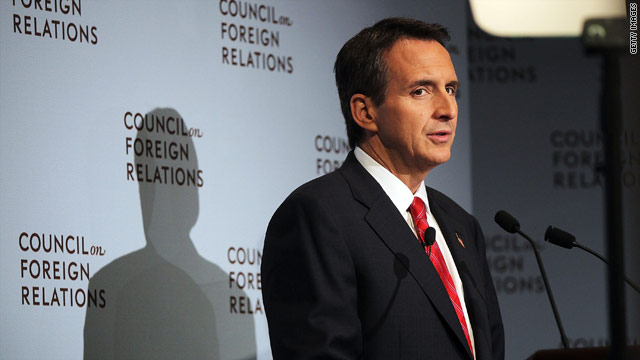 And as he faces stubbornly low poll numbers in the Republican race for the White House, the candidate appears to be working to gain more traction by repeatedly highlighting his accomplishments in order to contrast with the shortcomings of his opponents. But he avoids throwing sharp elbows by mentioning names.

The candidate spoke to a small room of voters gathered at a church in Ames, Iowa. It is in this city where a looming, high-stakes political drama will play out. The August 13 Ames Straw Poll will test Pawlenty's popularity, along with that of other GOP candidates.

During his speech, Pawlenty implored the assembled voters to attend the straw poll and support his campaign.

He urged listeners to back "somebody who can actually beat Barack Obama," adding, "Somebody who has the executive experience to have run something large and [has] driven it to results with a public component and so that the rest of the country says, 'Yeah, that person can be president. And that they can actually function.'"

At another point – while slamming the president's past as an Illinois state senator and community organizer – Pawlenty said, "You can't put somebody in the Oval Office who hasn't had executive experience leading a large enterprise."

"We can't make that mistake again," he said, specifically referring to the president.

And at still another point, Pawlenty urged the crowd to carefully "think about the other leading candidates" and whether or not they appeal to just one segment of the Republican Party.

"If we put somebody forward in Iowa, or more broadly in this process, who appeals to one chunk of the coalition but not all of it – we're going to start with a disunited party or an underwhelming effort," Pawlenty said.

He later added: "I ask you to think about it before you launch the rocket out of here, which will be the first step in the process. Make sure it's the rocket that can go all the way to the destination we seek. Everybody's gonna say they can do that. But I got elected and re-elected as a movement conservative in Minnesota."
Pawlenty did not mention names of the "other leading candidates."

But among the other well-known contenders, Rep. Michele Bachmann is a three-term congresswoman – but does not have executive experience in government and gets a considerable amount of her appeal from the tea party movement. She also tops Pawlenty in several recent polls ahead of the first-in-the-nation Iowa caucuses.

Pawlenty recently took a direct shot at Bachmann, saying on NBC's "Meet the Press," "I like Congresswoman Bachmann. I've campaigned for her. I respect her, but her record of accomplishment in Congress is non-existent."

"We're not looking for folks who just have speech capabilities," Pawlenty added. "We're looking for who can lead a large enterprise in a public setting and drive it to conclusion. I have done that; she hasn't."

Bachmann responded in a statement by saying she'd highlight her accomplishments - and avoid "negativity."
Meanwhile, others in the GOP race such as businessman Herman Cain, Texas Rep. Ron Paul and former House Speaker Newt Gingrich also jockey against Pawlenty for support in the polls – and also lack executive experience in government.

CNN asked Pawlenty about his opponents' lack of "executive experience" after his speech. The candidate would only repeat his previous comments.

"Well regardless of any particular candidate, I think one of the criteria the American people are going to look for – after the broken promises and failed rhetoric and failed leadership of Barack Obama who had no experience – is this: we want somebody in the Oval Office who has led something, a large enterprise under difficult circumstances and driven it to conclusion and results and have a public component to all of that."

"I think that's the kind of person, and …one of the credentials we need for the next president of the United States."