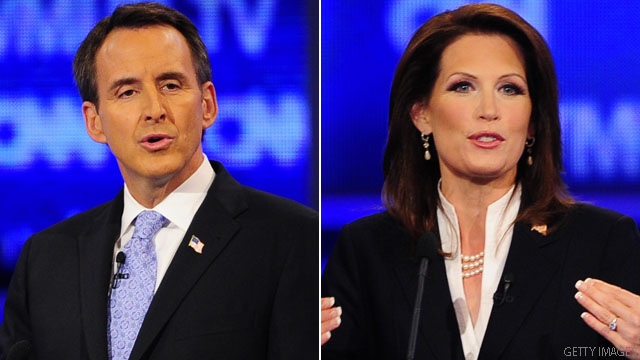 "I think it's mostly a sideshow," Pawlenty said on Fox News. "I've observed Congresswoman Bachmann. I've never seen her have a medical condition or impairment that would seem to be a concern."

Earlier in the day the former Minnesota governor said "candidates are going to have to be able to demonstrate they can do all of the job, all of the time."

But on Fox, Pawlenty said his remark was aimed at the entire Republican field.

"What I said today generically, applying to all candidates, not her, is that anybody who's going to serve as president of the United States, of course, has to be able to do all of the job all of the time, 24/7," Pawlenty said. "That's just common sense. It's not a debatable proposition."

After a report in the Daily Caller, the Minnesota Congresswoman said Tuesday she treats her migraines with medicine as needed and emphasized the rigorous pace of her campaign schedule since she entered the 2012 race. On Wednesday she released a letter from the attending Congressional physician, which said her migraines occur "infrequently and have known trigger factors of which you are aware and know how to avoid."

While Pawlenty sought to clarify his position, GOP candidates Mitt Romney and Rep. Ron Paul of Texas said Bachmann's condition should not be a focal point of the campaign.

"There's no question in my mind that Michele Bachmann's health is in no way an impediment to her being able to serve as president," the former Massachusetts governor said.

In a radio interview Wednesday, Paul, a medical doctor, said the electorate has a right to know "what a president is capable of doing," but that it does not disqualify her as a candidate for the presidency.

"I don't think that should be the deciding factor on how well she does, but I would say the information is reasonable to know about," Paul said.