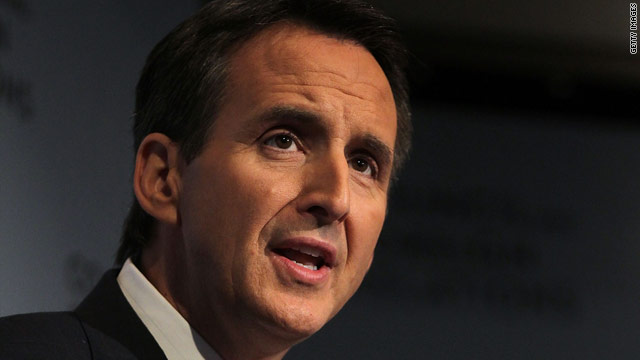 Dodge City, Iowa (CNN) – On Thursday, Republican presidential candidate Tim Pawlenty put a fresh twist on his recent tactic of calling out his GOP opponents - in this case lumping Mitt Romney and Michele Bachmann together in a single slam.

The former Minnesota governor also talked about the political perils of chronically ranking "sixth or seventh place" in recent polls.

Pawlenty spoke to a small crowd assembled in a public library's conference room in Dodge City, Iowa. He reiterated his stance against President Obama's handling of the economy, "Obamacare," and government spending - and played up his conservative bona fides.

Rep. Michele Bachmann is in her third term in Congress and currently tops Pawlenty in some Iowa polls.

After the speech, CNN asked Pawlenty if, indeed, his slams were aimed at Bachmann and Romney – two people he's previously criticized, separately.

"My record in Minnesota of cutting taxes, reducing spending, and doing health care reform the right way... stands in contrast to Congresswoman Bachmann – in terms of the sense I actually have results. And in contrast to Gov. Romney in terms of, we took a different direction, I think a better and more conservative direction in my policies," Pawlenty said.

Meanwhile, the candidate also talked about August 13's critical Ames Straw Poll, which will test his popularity in Iowa as well as the other GOP contenders. Iowa's caucuses early next year are the nation's first major presidential contest.

"Our goal for the Ames Straw Poll is to move from back of the pack towards the front of the pack. And I'm confident we will," Pawlenty said, adding, "We definitely gotta show some progress."

He mentioned television and radio ads, direct mailings and his frequent campaigning in Iowa.

"I think you're going to see us move up nicely from sixth or seventh place to a better position in the Ames Straw Poll," Pawlenty said.