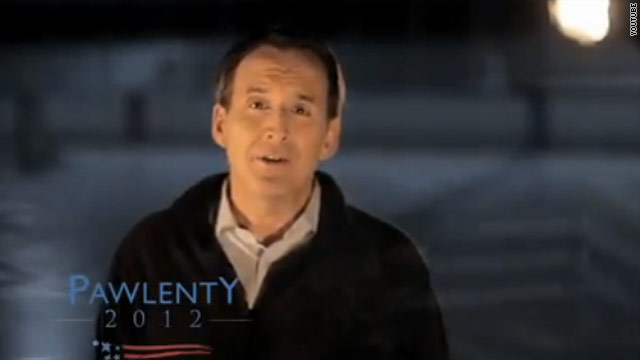 Pawlenty on ice over new ad

(CNN) - Down in the polls in the crucial state of Iowa, 2012 presidential candidate Tim Pawlenty wants Americans to know he believes in miracles.

But ABC Sports has taken issue with the Pawlenty campaign for a new ad launched Wednesday in the Hawkeye state that airs parts of the famous Al Michaels "Do you believe in miracles?" telecast from the 1980 Olympics.

Mike Soltys, vice president of communications at ESPN, said Thursday that the Pawlenty campaign did not obtain permission to use the footage.

"Neither ABC nor ESPN licensed the video to them or authorized its use," he stated.

And though reports have circulated that ABC Sports issued a cease-and-desist letter, Soltys insisted that's not the case.

"Neither ABC nor ESPN has asked the Pawlenty campaign to remove the footage from their video," he told CNN.

The Pawlenty campaign explained that any footage was used fairly.

Spokesman Alex Conant said, "All of our campaign television advertising is carefully reviewed by the campaign's lawyers to ensure compliance with the copyright laws, the federal election laws, and other legal provisions."

Pawlenty, a former hockey player, speaks of life on the campaign trail in the spot. "Out here, you're tested," he says as scenes play from the historic Olympic hockey game when the USA team, made of up college players and amateurs, went on to win a gold medal, defeating opponents who were considered to be the best.

"You face an opponent experts say can't be beat. You fight, you bleed, you prevail," he continues in the ad titled, "The American Comeback."

"Our country's down, but we're not out."

A comeback is what he's hoping for. Pawlenty has been polling in the low single digits of support for several weeks.

And though ABC Sports has called a penalty on his campaign, the campaign spokesman assured CNN they are not yet out.

"The campaign's 'Miracle on Ice' advertisement was carefully reviewed for legal compliance and we believe fully complies with the fair use doctrine," Conant said. "We respect ABC's concern and look forward to responding to their inquiry."