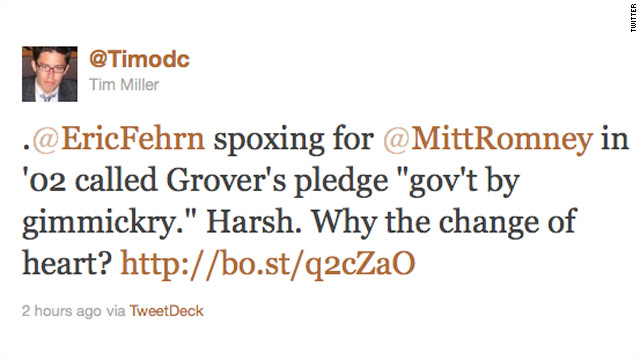 The link goes to an article in the Boston Globe that quotes Romney and Fehrnstrom saying he would not sign a no-new-taxes pledge as a candidate for governor.

"I'm not intending to, at this stage, sign a document which would prevent me from being able to look specifically at the revenue needs of the Commonwealth," Romney said.

At the time Fehrnstrom called such pledges "government by gimmickry."

However, as a candidate for president, the former Massachusetts governor has signed the "Taxpayer Protection Pledge," a no-new-taxes promise from Americans for Tax Reform and the "cut, cap, and balance" pledge, which calls for a balanced budget amendment, among other demands, to raise the debt ceiling.

Huntsman and Romney are both Mormon former governors with ties to Utah, an early presidential voting state.

Huntsman has consistently refused to sign pledges, as a candidate for Utah governor and as a 2012 presidential candidate.

"Other than the pledge of allegiance, I don't do a whole lot of pledges," Huntsman told CNN in June.

The Huntsman camp tweet comes the day after his campaign manager resigned. In a statement, senior Campaign Adviser John Weaver said the campaign is moving into a more aggressive phase from a "messaging and tactical standpoint."

Eric Fehrnstrom did not immediately respond to a request for comment.