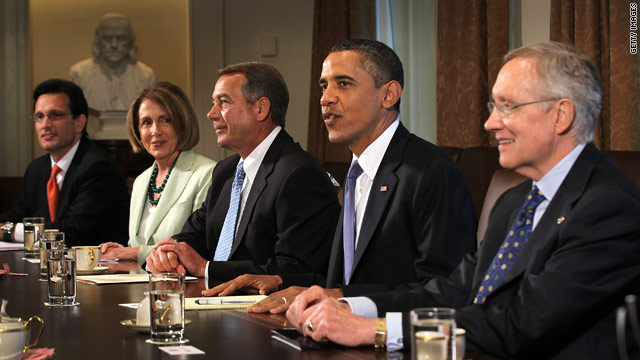 Capitol Hill (CNN) - For weeks now, lawmakers in Washington have produced intense drama over the debt ceiling with no lasting results or clear meaning. Terrible politics, but perhaps it could make for a good movie. Or farce.

To help understand the bottom lines and broad themes in debt negotiations, the crew of CNN's American Sauce podcast asked a team of Hollywood screenwriters to look at the debt debate and present their pitches for National Debt: The Movie.

Brett Carlson and Brian Graves call themselves "Some Dudes Who Can Write," and agreed to the challenge with the caveat that their pitches mesh with their style: comedy.

They came up with four movies which parody and glean some of the truth of the debt debate. Below we've listed all four along with audio links to Brett and Brian's pitches, to help you feel like a studio executive with the fate of two writers in your hands.

Keep in mind, we stress, this is satire.

"So the first one is 'Everybody Hates Joe'," began Graves.

Listen to the pitch here.

Fictionalized Movie: "Our hero is Joe Biden," mused Carlson. "He's an average man of average intelligence, trying his best to do his job that quite frankly might be a little bit past his capacity... but he's a good guy. And he tries real hard."

This is a good time to remind you, once more, that these movie ideas are farce and fiction. And from the mind of two screenwriters.

"It's a fish-out-of-water, door-slapping farce," continued Graves, "He's got a boss he has to answer to… who maybe does not pay as much attention to what Joe is doing as he needs to."

True Story: Vice President Joe Biden led the first series of debt negotiations. President Obama did not directly participate. In those discussions, Democrats and Republicans agreed to approximately $500 billion – $1.5 trillion in budget cuts, but talks broke down when the two sides could not agree on tax revenue and House Majority Leader Eric Cantor walked out.

Broader Theme: The debt negotiations have changed constantly with both sides ending meetings or dropping out of discussions abruptly. Few believed the Biden talks would settle the matter, but both sides started there.

Listen to their pitch to CNN's Lisa Desjardins.

Fictionalized Movie: It centers around, Carlson explained, "a bored-to-death teen who's a high school page up in Washington for the summer, who's stuck in chambers listening to all the rhetoric."

Graves added the plot. "He comes across and accidentally reads an ancient curse that makes all rhetoric real," he pitched. "So the world starts pulling band-aids and eating vegetables, per Obama's suggestions."

When Republicans call Democrats Jell-O, President Obama would, in fact, turn into the rubbery dessert.

True Story: As he called for both sides to compromise, President Obama said it's time to "rip off the band-aid" and "eat your peas." House Speaker John Boehner said of White House negotiators, "Dealing with them the last couple months has been like dealing with Jell-O."

Broader Theme: Often rhetoric and finger-pointing between the two parties has overwhelmed substantive debate over the government's fiscal crisis.

Listen to their pitch.

Fictionalized Movie: "Tim Huelskamp is a freshman congressman from Kansas," Carlson began, "He was a farm boy, he was a farmer, he has a Ph.D… he's adopted four children. The man is a walking paragon of virtue."

The writers' Mr. Huelskamp, like the real Rep. Huelskamp, is a member of the Tea Party Caucus. He arrives in Washington with fiscally conservative principles.

"Once he gets to Washington, everyone says 'You've got to compromise… you've got to give in on your principles to get anything done," Carlson spelled out the central conflict. "Can a man stick to his guns and refuse under all circumstances, come what may, come the end of the federal government, refuse to compromise?"

True Story: The actual Rep. Tim Huelskamp, R-Kansas, has signed a pledge vowing to vote against any increase in the debt ceiling unless Congress also passes a balanced budget amendment. But he has also said that he will not allow the nation to go into default on the debt and that he could agree to broad tax reform which does not raise taxes overall.

Broader Theme: The large class of fiscally-conservative freshman Republicans in the House has been a large factor in the debt debate and discussions of what kind of deal could pass in the House. Their staunch resistance to increasing the debt ceiling without major, long-term spending reform became the overall Republican position. At the same time, at least some of this large voting block is needed for any compromise to succeed. Many are watching to see if the Republican freshmen draw a hard-line in this debate or end up in a more nuanced or hybrid position.

Listen to the pitch to Desjardins here.

Fictionalized Movie: The Democrots would fight the Republicons.

"I need just a tiny bit more on the plot," Desjardins asked, "You would turn our lawmakers into giant robots?"

"Listen, it's a Transformer movie," Carlson responded, "There's no plot… Stuff explodes in the first and third acts. Don't worry about it. There's no plot."

"Nothing makes any sense and then it ends?" Desjardins checked.

"So it's just like this (debt) issue," Graves concluded.

True Story: Neither Republicans nor Democrats are robots. This story is entirely fiction.

Brett Carlson and Brian Graves are screenwriting partners and filmmakers in Los Angeles, CA. Their award-winning script TAKE MY WIFE is currently being shopped (and pitched) to major motion picture studios. Follow them @Dudes_Can_Write.

Listen to the full American Sauce podcast on the national debt here. American Sauce is devoted to digging out the substance of Washington debates with real-world perspective and no empty, finger-pointing soundbites.