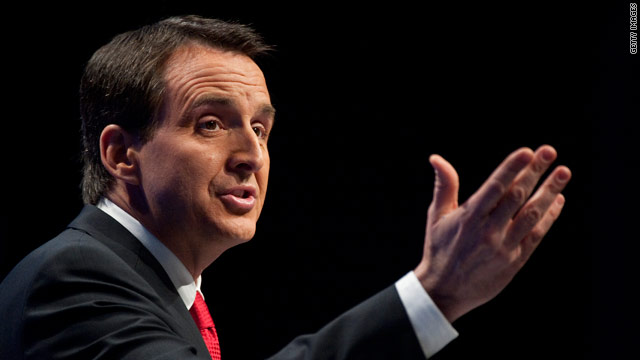 Des Moines, Iowa (CNN) – His poll numbers have remained low despite a vigorous campaign. And he admits he must "show some progress" at a looming, high-stakes contest.

But Republican presidential candidate Tim Pawlenty on Friday said any notion that he will soon quit the race is "preposterous."

The former Minnesota governor made the comments in an exclusive interview with CNN Anchor and Chief Political Correspondent Candy Crowley that will air Sunday on CNN's "State of the Union."

On August 13, Iowa's Ames Straw Poll will test Pawlenty's popularity along with that of other GOP candidates.

"Does the Ames Straw Poll matter to you in terms of whether your intent to stay in through the caucuses and beyond?" Crowley asked Pawlenty.

"Well we're in this race to win," Pawlenty responded. "We're going to win the Iowa caucuses."

The candidate continued: "I suppose if we came in dead last or something in the straw poll that may have a bearing. But we're not going to do that. We're already showing good progress. And our goal is to move, as I said earlier, from towards the back of the pack towards the front of the pack."

"And this idea that we are going to drop out after the Ames straw poll is preposterous," Pawlenty said.

Would it be difficult, politically, Crowley asked.

"Well, I don't see those stories about Rick Santorum, or Newt Gingrich or Herman Cain or the others," Pawlenty said.