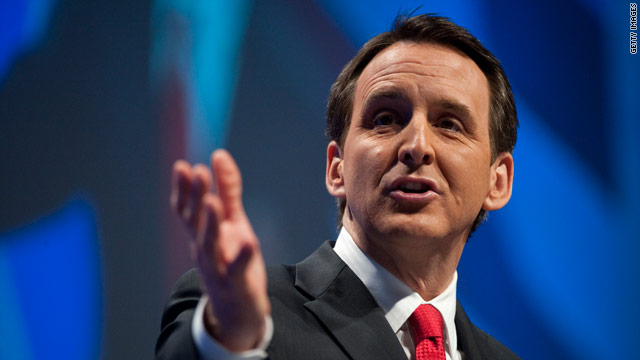 Pawlenty to Obama: 'Quit hiding in the basement' over entitlement reform

Pawlenty made the comments to CNN Anchor and Chief Political Correspondent Candy Crowley in an interview to be aired Sunday on CNN's "State of the Union."

The former Minnesota governor used a blistering metaphor to suggest the president is going to great lengths to avoid public scrutiny on the issue.

"If you're the leader of the free world would you please come to the microphone and quit hiding in the basement about your proposals. And come on up and address the American people," Pawlenty said.

"Is he chicken?" the former governor quipped.

It's unclear if Pawlenty's tough talk is intentionally designed to combat, what some see as, a nice-guy image or if the amped-up comments are designed to raise his stubbornly low poll numbers in the Republican presidential race.

"We need real permanent structural reforms," Pawlenty said, adding that he'd push for the Cut, Cap and Balance plan if he were president. That plan, after passing in the House earlier this week, failed to clear the Senate on Friday. It would have tied a debt ceiling increase to sweeping reductions in federal spending, caps on future expenditures, and a balanced budget amendment to the Constitution.

When the conversation between Crowley and Pawlenty turned to reforming the nation's massive and costly entitlement programs, Pawlenty used some of his harshest language.

Crowley pressed Pawlenty, saying that apparently, the president has spoken with House Speaker John Boehner privately about some of these proposals.

"If we want to do it in private we can go down to the VFW basement – I can go have a beer with my neighbor over that," Pawlenty said.  "He's the president.  Come on out of the basement. And come on out to the lawn of the White House or the microphone and tell us your plan on entitlement reform. And he won't do it because he doesn't have the courage to do it."