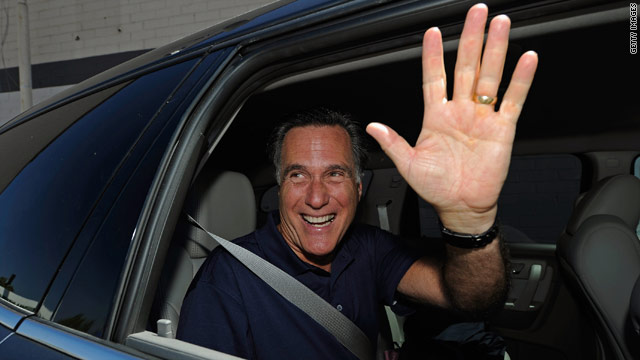 The former Massachusetts governor and 2012 GOP presidential candidate makes his second visit to the first-in-the-nation caucus state on Thursday August 11. Romney, who's making his second bid for the White House, makes a swing through the Iowa State Fair in Des Moines, a must stop for anyone running for president. A source with knowledge of Romney's schedule confirmed the timing to CNN.

Later that day Romney drives about 40 minutes north on I-35 to Ames, Iowa, to take part in a Republican presidential debate that night. But Romney leaves Ames well before Saturday's crucial straw poll, which he's skipping.

Friday Romney's in New Hampshire, the first-in-the-nation primary state. He'll be the center of attention at a house party being put on by Ovide Lamontagne, a leading conservative in the Granite State, who is holding such events with many of the Republican White House hopefuls.

While he's made at least ten campaign visits this year to New Hampshire, the state that holds the first primary in the race for the White House, Romney has visited Iowa only once, in May. But he did speak with nearly 10,000 Iowans Monday night during a tele-town hall, and indicated he may hold another one, saying that "I'll look forward to doing this again."

During the tele-town hall, according to a report from the Des Moines Register and confirmed by campaign officials, Romney was asked why he isn't participating in the Ames straw poll. Romney answered, as he has in the past, that he's opting out of all straw polls, including ones in Florida, Michigan and elsewhere.

"We said, you know, resources, money, is hard to come by. We want to use the money we have to win the caucuses, to win the primaries, to win the conventions, to be able to get delegates and become the nominee," added Romney, who's considered the front-runner at this point in the race for the GOP nomination.

Romney won the straw poll four years ago, but the headlines went to former Arkansas Gov. Mike Huckabee, who had a surprising second place finish. Despite spending a lot of time and money in Iowa, Romney came in second to Huckabee in the caucuses the following January.