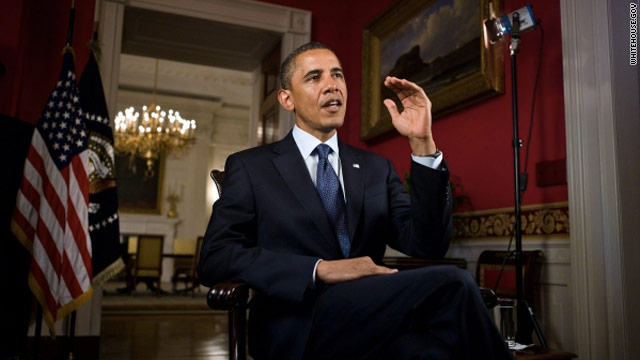 Obama calls for leaders to work together on debt deal

Washington (CNN) - President Barack Obama called on Democratic and Republican leaders to come together and do "the right thing" to resolve the nation's debt crisis Saturday in his weekly address.

He warned that unless an agreement is reached to raise the amount of money the federal government is allowed to borrow, debt will "weaken our economy, cause higher interest rates for families, and force us to scale back things like education and Medicare."

The president summoned congressional leaders to the White House Saturday after House Speaker John Boehner announced Friday night he was pulling out of the debt-ceiling negotiations with the Obama administration.

"Neither party is blameless," Obama said of the nation's debt. "Both parties have a responsibility to do something about it."

If a deal to raise the debt ceiling is not reached by August 2, the nation risks default, and Americans could face problems including rising interest rates, a declining dollar and increasingly jittery financial markets.

Envisioning a way forward, the president said, "We need to put aside our differences to do what's right for the country. Everyone is going to have to be willing to compromise. Otherwise, we'll never get anything done."

Obama advocated a "balanced approach" to cutting the deficit that "goes after waste" and "makes some serious cuts to worthy programs" that wouldn't be made "under normal circumstances."

And he emphasized the need for everyone to "do their part" because "it's not right to ask middle-class families to pay more for college before we ask the biggest corporations to pay their fair share of taxes."

"Before we ask seniors to pay more for Medicare, we should ask the wealthiest taxpayers to give up tax breaks we simply cannot afford under these circumstances," the president added.

Looking to history for support, Obama argued that an approach including "serious cuts, balanced by some new revenues" was also favored by past presidents "from Bill Clinton to Ronald Reagan."

The president admitted there will be plenty to haggle over in the future, but attempted to simplify the complicated issue.

"This debate boils down to a simple choice," he said. "We can come together for the good of the country and reach a compromise or we can issue insults and demands and ultimatums at each other, withdraw to partisan corners, and achieve nothing."

"We know the right thing to do, and we know what the American people expect us to do," he resolved.

"It's a lack of confidence in our nation's future that's holding our economy back," he said.

"Small business owners are pleading for government to stop the reckless spending, balance the budget, and then just get out of the way."

Pledging that Republicans are committed to "removing government barriers to private sector job growth," the five-term Texas congressman praised the American workforce as "the best entrepreneurs and workers in the world" who can "compete and win against anyone, anywhere, anytime "given a level playing field."

But he cautioned that government interference will harm that potential.

"Our government has gotten so big, so expensive, it's keeping our economy from recovering as it should," Hensarling said.

"If we're going to avoid any type of default and downgrade, if we're going to resume job creation in America, the president and his allies need to listen to the people and work with Republicans to cut up the credit cards once and for all."

Hensarling endorsed the "Cut, Cap and Balance" bill passed by the House but rejected by the Senate and said overall, "It's time to cut, cap and balance. That's what will give us jobs, hope, and opportunity."