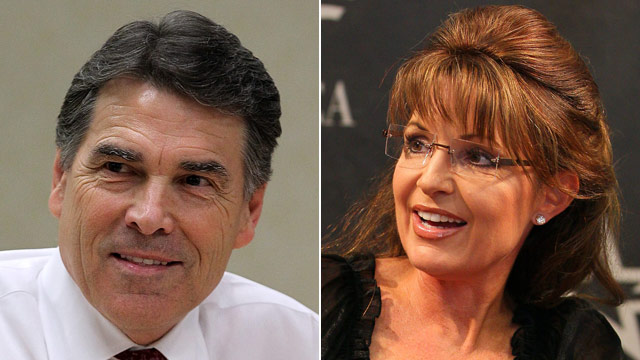 (CNN)-Former governors Mitt Romney and Jon Huntsman announced they wouldn’t compete at the Ames straw poll in Iowa, but the state GOP added them to the ballot anyway, along with former House Speaker Newt Gingrich.

But former Alaska Gov. Sarah Palin and Texas Gov. Rick Perry – who haven’t yet decided on a presidential bid – were left off.

The Ames straw poll is an early test of candidate strength in the first-in-the-nation caucus state, with the ability to elevate, solidify, or break a candidate’s rank in the GOP field. It is also considered an indicator of who may win the first significant presidential contest.

Critical members of Gingrich’s Iowa campaign resigned shortly before the bidding process for straw poll lots, hampering an already financially-strapped effort to win big in Iowa. Gingrich did not reserve space with other candidates in June.

Huntsman announced he would not compete in Iowa, choosing to focus instead on the first-in-the-nation primary state of New Hampshire

Romney, who also sought the GOP nomination in 2008, also stated he'd sit out the straw poll in Ames. Though he won the contest in 2007, Romney fell short of winning the Iowa caucus, which went to former Arkansas Gov. Mike Huckabee, Romney’s straw poll runner-up.

Palin stated she would announce her intention to run–or stay out of the race–in late August or early September. Perry said Friday that he'll make his decision known in the next three to four weeks.

Americans for Rick Perry, an independent group supporting the Texas governor, told CNN that its efforts to get Perry onto the Ames ballot failed. The group's leader,Bob Schuman, told CNN,"The other candidates sure seem to fear Gov. Perry."

Palin and Perry may have been left off the ballot, but straw poll voters will be able to write in their pick for president.

The addition of Romney, Huntsman, and Gingrich to the straw poll ballot is no special practice. Former New York City Mayor Rudy Giuliani, former Tennessee Sen. Fred Thompson and Arizona Sen. John McCain all chose to skip the contest in 2007, but were added to the ballot.

And though he placed 10th, McCain went on to win the 2008 GOP nomination for president, proving that results of the straw poll may not necessarily predict who ends up on top.